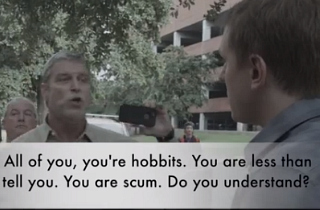 O’Keefe and his Project Veritas crew were attempting to interview Letten on matters “unrelated” to the charges the former prosecutor’s office had brought against him in the phone-tampering of a Democratic U.S. senator. Rather than allow himself to be subjected to the editing of PV, Letten pulled out his own smartphone to record the conversation and proceeded to berate O’Keefe.

“You went to my house, you terrorized my wife, you’re violating federal law, you’re trespassing, you’re a nasty little cowardly spud,” Letten excoriates the filmmaker. “All of you, you’re hobbits. You are less than I can ever tell you. You are scum. Do you understand?”

O’Keefe denied any charges that he “terrorized” Letten’s wife, and the Project Veritas video includes footage of the filmmaker appearing at the Letten home to speak with the wife.

“I got you on tape doing it,” Letten insisted in return. “I got you trespassing on my family’s property.”

With cameras rolling, O’Keefe attempted to hand Letten a copy of his new book Breakthrough: Our Guerilla War to Expose Fraud and Save Democracy, which the former prosecutor refused and threw back in the filmmaker’s face.

Letten and O’Keefe have had a long history, stemming from the former prosecutor’s office bringing charges against the filmmaker in regards to tampering with the phones in Sen. Mary Landrieu‘s office back in 2010. Letten eventually recused himself from the case for undisclosed reasons. He is currently an assistant dean at Tulane University Law School after he resigned, in late 2012, from his attorneyship amid a scandal involving anonymous online comments about high-ranking prosecutors within his office.

Watch the harsh exchange below: