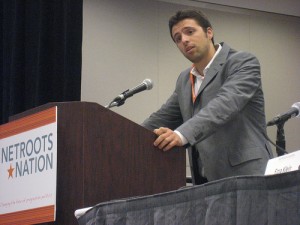 Man, people have not been having an easy time expressing their thoughts on TV these days. This morning Ezra Klein was on MSNBC trying to elaborate the many ways that the GOP plan of reading the Constitution aloud in Congress was but “a gimmick.” However, in many people’s views, his comments were boiled down to the Constitution being “confusing” and “nonbinding.” Like Professor Melissa Harris-Perry before him, Klein has taken to the Internet to clarify his statement.

In his Washington Post blog, Klein explained what he really meant in his typical calm manner:

“The initial interpretation was that I’d said the Constitution is too complicated to understand because it was written a long time ago, and then, as the day went on, that I’d said the document itself is nonbinding. I went back and watched the clip — or at least the part someone clipped and sent me, which is above — and thought I was clear enough. But when a lot of people misunderstand you at once, the fault is usually yours. So if I was unclear: Yes, the Constitution is binding. No, it’s not clear which interpretation of the Constitution the Supreme Court will declare binding at any given moment. And no, reading the document on the floor of the House will not make the country more like you want it to be, unless your problem with the country is that you thought the Constitution should be read aloud on the floor of the House more frequently. In which case, well, you’re in luck!”

The post is clever and well-written but it’s probably too little too late. For many Conservative commentators, the idea that Liberal Wunderkind Ezra Klein thinks that the Constitution is confusing might be too juicy a story to be taken down by any comments, no matter their nuance.

Read the rest of Klein’s statement here. Below is the original MSNBC segment. What do you think? Did he make himself clear?