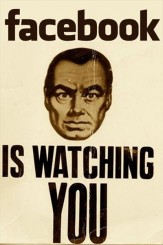 And now playing the role of Big Brother: Facebook. With a lot of help from you. On the off chance you may have missed the news in the last few days, Facebook has rolled out new, controversial privacy settings that appear to be aimed at getting users to make as much information about themselves available to as many people possible. Why is Facebook so keen on getting you to share all your favorite TV shows, and drunken party pics, and your entire list of friends and interests? Advertising baby. Facebook is a goldmine of data and the more they can provide the more they can charge.

Here’s the change that is causing the most consternation and for very good reason:

Certain categories of information such as your name, profile photo, list of friends and pages you are a fan of, gender, geographic region, and networks you belong to are considered publicly available to everyone, including Facebook-enhanced applications, and therefore do not have privacy settings.

So basically the entire world can now see your interests and who all your friends are. Think this isn’t a problem? Felix Salmon at Reuters and the guys at Clusterstock have already had their entire friends list published by a website in a move that looks a lot like a cyberstalking intimidation tactic. The only way to get out of this is to change your search results so that no one can find you on Facebook but your friends (which sort of defeats the purpose, which is probably what they had in mind), though even then all your friends, and 3rd party apps can see all your friends. And we all know that all our Facebook “friends” are not necessarily people we want to invite into all areas of our lives (let alone 3rd party apps). Getting the sense Facebook may not be on your side?

Then there’s this, which only came to my attention because people on my Facebook feed have been noting it warning “your friends are unwittingly transmitting your Facebook profile data to 3rd party apps YOU never authorized” which turns out to be the case.

If your friend uses an application that you do not use, you can control what types of information the application can access. Please note that applications will always be able to access your publicly available information (Name, Profile Picture, Gender, Current City, Networks, Friend List, and Pages)…

And practically everything else unless you go here to remove yourself. Wow right.

So, why now? You may recall Facebook struck a deal with Neilsen not that long ago to measure “ad awareness” of its users; basically how effective are the ads on your page at generating money. The more pages the more dat to mine. But there’s also this. Facebook has upwards of 300 million users most of whom have spent some considerable time filling their profiles with information and connections they’d probably rather not lose (the same argument behind Facebook charging a user fee). So basically the question now, for everyone involved is how far can Facebook push their policies, arguably against the users best interests, before the user decides to opt out. Answer is, they haven’t got there yet, though they certainly are walking a fine line with this latest round of changes.

What they have going for them is convenience and laziness; as irritated and angered as I am by all this I’m probably never going to spend the time to remove all that info, or find a new place to house all those connections, unless of course someone else comes along and makes it easy for me to do so. The irony, of course, would be that at some point down the line they cross the line enough that the government has to step in to protect our civil liberties. Orwell probably never saw that one coming.

UPDATE: We asked Facebook to explain why and how they thought these changes in privacy settings were in the user’s best interests and this is what we heard back from a Facebook spokesman:

The overwhelming majority of Facebook users have decided to make what we’ve classified as “publicly available information” available to everyone. We’ve found that the small percentage of those who have restricted any of this information have intended to prevent contact from non-friends. Users can still prevent from being found in searches on and off Facebook and messages or friend requests from strangers. Users come to Facebook to connect and share, not to hide and we know they get more value from the service when they find friends and are found by friends. With more than 350 million members, Facebook has grown so large that there are multiple users for even uncommon names and potentially thousands for common names. This additional information helps users connect with the friends they are looking to find.

Going forward, applications on the Facebook platform will only have access to a user’s publicly available information and any information he or she has made visible to “Everyone.” To access any more information, the application will need to ask for the user’s approval. A very small percentage of our 350 million plus users (about 350,000) opted out of platform in the past. That makes the setting one of the least used features on Facebook. Under the new system, users can hide all the non-”Everyone” information they deem fit. With regard to publicly available information, it’s worth noting that this change is largely an additional disclosure of an existing practice. Users could never restrict visibilty of name, networks and pages they are a fan of.

So basically, this sounds to me like a lot of users weren’t paying attention to their Facebook privacy settings and Facebook has taken that as a democratic reflection of the wishes of its users as a whole, without actually putting it to a vote, or allowing those old settings to remain for the easily overlooked 350,000 users who took the time to find them and apply them. How forcing users to comply with this arbitrary decision and removing their control over their own profiles is in our best interests still remains a mystery.