FLASHBACK: Hillary Clinton Called For an End To the Electoral College In 2000 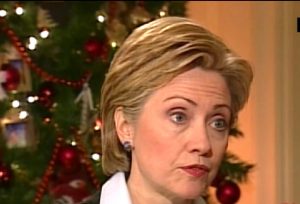 Despite the fact that most election forecasters and polls had Hillary Clinton winning fairly easily on Election Day, the Democratic presidential nominee was defeated pretty handily by Donald Trump.

Trump was able to cruise to victory because he was able to pick off states that polls showed were toss ups or solidly blue, such as Wisconsin, Pennsylvania and Florida. In the case of all three states, each of which represented double-digit electoral votes, Clinton lost by roughly one percentage point.

These elections are so close. Trump won comfortably by winning by 1.4 points or less in four key states. pic.twitter.com/VstxNgJYZr

However, when it came to the national popular vote, it looks like Clinton will win. As of 12:33 PM ET, Clinton led Trump by 238,156 votes. This is reminiscent of Al Gore’s defeat in 2000, with that vote coming down to a razor-thin margin in Florida and the Supreme Court despite Gore claiming a solid national popular vote victory.

And, lo and behold, back in 2000, following her own Senate victory, Clinton had some thoughts on the Electoral College. With Gore and George W. Bush still awaiting the results from Florida — Bush would inevitably win — Clinton had the following to say.

“We are a very different country than we were 200 years ago,” Clinton said. “I believe strongly that in a democracy, we should respect the will of the people and to me, that means it’s time to do away with the Electoral College and move to the popular election of our president.”

The first lady also said that because of the closeness of this year’s presidential election, “I hope no one is ever in doubt again about whether their vote counts.”

As for today, Clinton delivered her concession speech, following up her phone call to Trump congratulating him early this morning. At not time did we hear her mention the need to just base the election on the national popular vote.