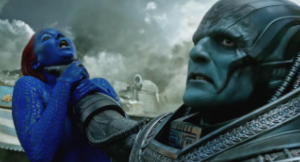 Twentieth Century Fox is apologizing for it’s marketing campaign after drawing criticism for a poster they’ve used to hype up audiences for the film X-Men Apocalypse.

The film marks the latest installment of the X-Men franchise, in which the mutant superheroes work to take down the titular Apocalypse before he takes control of the world. Naturally, a big-budget film like this requires a marketing strategy, but one of the images placed on billboards and signs has reportedly drawn a great deal of criticism on social media.

The image in question shows Apocalypse (played by Oscar Isaac) in the process of throttling the shapeshifting Mystique (played by Jennifer Lawrence).

Now, while some might say that this image gives a pretty good idea of the antagonist’s villainy, multiple outlets are reporting on a great deal of online pushback it’s been getting. The outrage seems to have started after actress Rose McGowen told The Hollywood Reporter how the image used “casual violence against women” to market a film.

“There is no context in the ad, just a woman getting strangled,” McGowan said. “The fact that no one flagged this is offensive and frankly, stupid. The geniuses behind this, and I use that term lightly, need to to take a long hard look at the mirror and see how they are contributing to society.”

In response to the criticism, Fox released this statement:

“In our enthusiasm to show the villainy of the character Apocalypse we didn’t immediately recognize the upsetting connotation of this image in print form. Once we realized how insensitive it was, we quickly took steps to remove those materials. We apologize for our actions and would never condone violence against women.”

What say you? Worth the criticism, or more ultra political correctness run rampant?