WHERE DID YOU SERVE 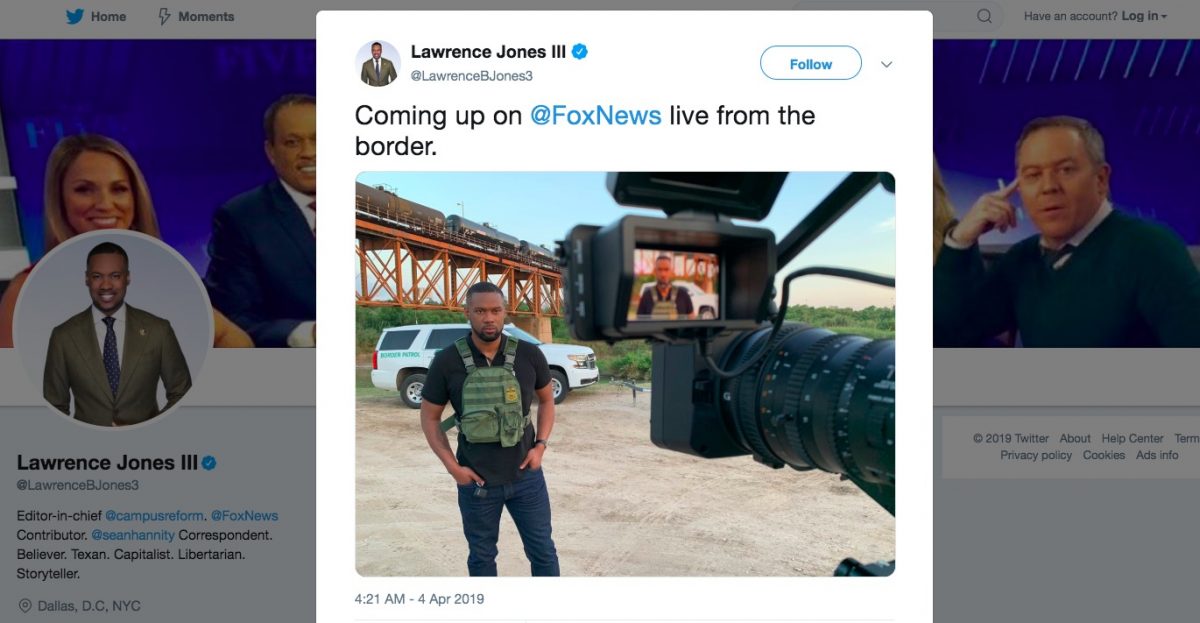 Fox News contributor Lawrence Jones was viciously mocked on Twitter Thursday after he shared a picture of himself wearing a tiny tactical vest while reporting from the U.S.-Mexico border.

“Coming up on @FoxNews live from the border,” Jones tweeted along with the image of him decked out in OD green gear with a law enforcement emblem on it.

Coming up on @FoxNews live from the border. pic.twitter.com/aRlNQxrO1x

Jones brushed off criticisms of his bold fashion statement by claiming Border Patrol “required” he wear the vest during his “ride along” with the agents.

“Did I say it was a war zone or did you ignorantly assume that because I was wearing a vest?” Jones said in one of his dozen responses to critics. “Bottom line: CBP instructed me to put on one of their vests during my ride along. Period.”

Border patrol made me wear it. Now, who's the fool? https://t.co/8ytTDLATth

However, MSNBC’s Jacob Soboroff — who covers the border frequently — called the tactical accessory “totally ridiculous” and said he has never been asked to wear one during his coverage with Border Patrol.

This is totally ridiculous.

I have never once worn a bulletproof vest at the border, nor has CBP ever asked me to — even while on a chase with Border Patrol to apprehend migrants in remote Arizona desert in the middle of the night.

Mediaite contacted U.S. Customs and Border Protection to explain the need for Jones’ vest but did not receive a response in time for publication.

Other Twitter users turned the picture into memes, mocked the get-up as “cosplay,” and questioned why a Fox News contributor would be given a vest with a law enforcement agency’s emblem on it in the first place.

Check out a few of the best responses below:

The meme game on this post’s replies is spectacular

(Nota bene: There has never, ever been any requirement or need to wear a flak jacket at the US-Mexico border, and nobody’s ever heard of a reporter doing so at any time) https://t.co/AoJsPy4uox

1. Next time you might want to buy the vest from the adults section.

2. That’s a decorative prop, not a functional piece of protective gear. https://t.co/PjN8Wk0YQJ

“You weren’t on Operation Hastings, Payback. You weren’t even in country.” https://t.co/eeFOnTB2eh

What is this? A vest for ants? https://t.co/WW5SfBkR1n

Why is a Fox News reporter wearing a tiny bulletproof vest with a federal government logo on it? https://t.co/OxWOYATzlN

I can only assume that Lawrence Jones is giving an impassioned defense of the merits of cosplay https://t.co/HI1rUZMnn0

That is a huge fanny pack. https://t.co/oFh6sUNDzx

thank you for your service https://t.co/57fQFXppwo