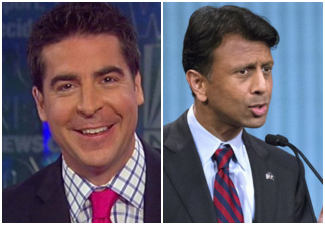 My operating theory for this year’s Republican presidential primary has long been that the GOP base isn’t driven by a desire for an “outsider,” but by unquenchable white male resentment. There were several moments at last night’s debate that I think will put that theory to the test.

There were surprisingly few fireworks at Tuesday night’s Fox Business Republican Debate, but hours earlier, at the Battle of the Polling Blips, Louisiana Governor Bobby Jindal scored what might have been the line of the night when he torpedoed an ingratiating New Jersey Governor Chris Christie for not turning down the Obamacare Medicaid expansion:

CHRISTIE: Yeah, listen. We stopped Obamacare in New Jersey because we refused to participate in the federal exchange.

Republican voters are unlikely to be impressed with Christie for doing literally the least he could do to “stop” Obamacare, and even thought the media loves his recent viral video where he talks about caring about drug addicts, he’s not running for president of the People’s Republic of Drugachusetts. He’s toast in this primary.

You might expect Bobby Jindal to get something of a boost from his undercard performance, much of which he spent whipping Chris Christie like a bowl of egg whites, but even given that strong performance, he couldn’t impress Fox News’ Jesse Watters, who offered up this odd assessment of Jindal’s debate performance (emphasis mine):

Jindal was in attack mode, he attacked everybody including the moderator. I guess he’s trying to be the conservative, he went after Huckabee, crushed Huckabee, actually, really shut Huckabee down. Went after guys who weren’t on the stage, he went after Cruz, he went after Rand Paul the filibusterer so get nothing done, he went after Jeb, so he was trying to make a name for himself. He’s just not very physically impressive, when you look at him he kind of looks like a raisin, a little bit. You know, he’s just small. and wrinkly, and shrunken, and he just doesn’t have an imposing dynamic.

So, despite Watters’ impression that Jindal “crushed” Huckabee and had a really effective debate, for some reason Jindal’s physical appearance renders him a loser. I’m not sure what kind of a bellwether Jesse Watters is for Republican voters’ sentiments, but he said it on the number one conservative network, and everybody laughed. You would think that if they weren’t similarly dismissive of Jindal, he could expect some sort of polling bump from this performance. We’ll see. My prediction is that Republican voters are happy to have someone like Bobby Jindal do the dirty work of attacking someone like Chris Christie, but not much else.

Similarly, Carly Fiorina had a relatively big night. Despite being asked very few questions, she barreled her way into the conversation to clock fourth in talk time, and steamrolled the debate buzzer at every opportunity. Kasich and Cruz also outdid their weight class in talk time, but were also afforded more opportunities than Fiorina. But in the middle of a free-for-all on foreign policy, Donald Trump singled her out for interrupting Rand Paul, of all people, whom Donald Trump hates:

Oh, damn, Trump on Fiorina: "Why does she keep… by tommyxtopher

FIORINA: …he walked away, he quit talks…

PAUL: …Can I finish…

FIORINA: …when it was time to quit talking…

PAUL: …Can I finish my time?

TRUMP: Why does she keep interrupting everybody?

There was some booing, probably for a mixture of Rand Paul as well as for Trump and Fiorina’s interruptions, but look at what’s happened already. Fiorina has tried to call out the media for sexism, but it’s her party’s voters that have kept Donald Trump on top even after he insulted her face, and who quickly abandoned her after her last strong debate performance, and whose penchant for not electing women made Fiorina the lone woman in a field of 17 candidates. They’ve never even elected her to anything. Like Jindal, she’s perfectly useful as an identity-politics heat shield and attack dog, but to all appearances, most Republican voters agree with Trump that she’s a pushy, castrating broad, too. I think the post-debate polls will bear that out, as well.