Fox News Slammed on Twitter for ‘A Coup in America?’ Chyron: ‘Incredibly Irresponsible’

Fox News Slammed on Twitter for ‘A Coup in America?’ Chyron: ‘Incredibly Irresponsible’

Earlier today, we reported on Fox News’ Jesse Watters using the word “coup” to raise questions about whether the anti-Trump FBI texts reveal efforts to take down President Trump by any means necessary.

His monologue was accompanied by this chyron in a subsequent interview with Kellyanne Conway: 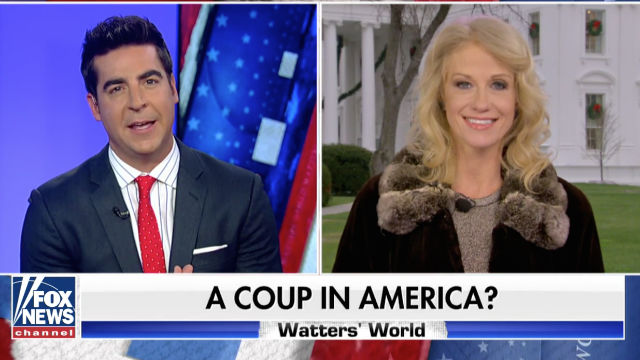 And Fox got some flak on Twitter over that:

Fox News throwing the c-word around with the kind of carelessness I've only ever seen in the Middle East pic.twitter.com/LnTCXhJLLg

This is fine. Thanks, Jesse Watters https://t.co/5ufv7lTQzD

Coup?! I cover wars. Militaries. Actual coups. Where citizens violently rise up and kill each other for power over each other.

This is alarmingly irresponsible language, even for Fox. Inflammatory. Baseless. Dangerous. https://t.co/1tGrKZGfTR

Next on Fox: Did President Hillary Clinton take power through a coup? https://t.co/CRbIVhgGOH

Of course it was. https://t.co/FXt2F7eYeV

In a proper coup, the first thing you do is seize state television broadcasting studios so you can put out the new party line and people know what’s what. https://t.co/QYwTmBVpJm

“A coup in America?” This is incredibly irresponsible rhetoric. It’s no surprise that the same network that still denies Russian interference for Trump, also uses this kind of language to describe law enforcement efforts to uphold the law and our sovereignty. https://t.co/VUilAaAhAD

Cable news banners don’t just appear out of thin air. Producers brainstorm, fact-check, proof-read them. Hosts are sometimes involved too. Yes, mistakes slip through occasionally. But this doesn’t look like a mistake… pic.twitter.com/nZkbRyKxUE

Suggesting there is a ‘coup’ afoot – an illegal military action against a head of state – is extreme even for hyperbolic Fox. https://t.co/nxaIZEff5n

I wake up this morning in Israel to find out that while I was sleeping, my Twitter feed exploded because GSA gave Mueller transition emails, Team Trump wrote a letter complaining about it, and Fox News is warning of a coup. #BabyCannons are going back to bed!

Fox should worry. State TV always gets it on day one of a coup. https://t.co/GByOkCzUvS

They and the propaganda blogs, like frivolous Daily Caller & deeply weird Breitbart, are working overtime to distort the message & paint those preparing to protest as calling for violence. It’s a cynical attempt to undermine protests like they’re attempting to undermine Mueller. https://t.co/r2mKBzIzwd

I'm an academic studying coups. This is embarrassing and dangerous. There is no coup in America, but there is a de-facto state propaganda outlet named Fox News. pic.twitter.com/Rtg37N84ZC