Fox Slamming Trump on Megyn Kelly’s Behalf Is a Good Step; Here’s What Should Happen Next
Opinion

Fox Slamming Trump on Megyn Kelly’s Behalf Is a Good Step; Here’s What Should Happen Next 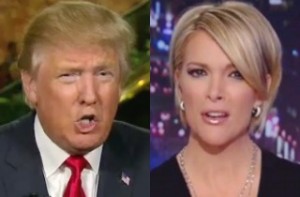 It was scathing. It was warranted. And yes, as far as communication between a network and presidential candidate is concerned, it was also unprecedented.

It, of course, is Fox’s Friday afternoon statement regarding its displeasure of Donald Trump’s Twitter treatment of Megyn Kelly, the network’s (and therefore cable news’) second-highest rated host. The one-sided feud — completely fueled and advanced by Trump — began back in August after the first Fox debate when Kelly, serving as one of three moderators, asked a legitimate question regarding the candidate’s pre-political past comments about certain women. The billionaire — outside of one short-lived cease fire — has been relentless in his attacks of her on social media since, with Kelly smartly avoiding returning fire in an effort to both be above it all and to protect her growing brand.

Not-so-consequently since announcing his candidacy nine months ago, the otherwise-ubiquitous Trump has yet to appear on Kelly’s 9:00 PM EST program. But ratings haven’t suffered for Fox in that timeslot, as The Kelly File continues to expand its audience as well as the range of guests it attracts (Michael Moore and Richard Dreyfuss recently sat down for interviews, for example). As far as the aforementioned growing brand, Kelly recently signed a multi-million dollar book deal with HarperCollins for as much as $3 million to $10 million (the true final amount depends on which report you want to believe). Regardless of the exact number, anything in the million-plus category for a first time author is practically unheard of in the publishing world. And just last month, she also got a Vanity Fair cover story, which also falls into the unheard of category as far as cable news hosts are concerned.

For those who missed it, here’s Fox’s statement after Trump attacked The Kelly File host again and again online last week:

Good for Fox for standing up for its own. And yes… it is utterly stunning that a leading presidential candidate can conduct himself as Trump has in this regard — like your average obnoxious teenage character out of a John Hughes movie — and still somehow lead in the polls. As noted in this space and on television before, Trump reaching Stage 5 Stalker status when it comes to Kelly has always struck me as pointless, as an unforced error. The upside is almost zero given Kelly’s respect from across the political spectrum and overall popularity. Even Trump supporters I’ve spoken to say the same thing when asked about the Kelly feud, which usually goes something like this: “I like Trump. He has my vote. But I just don’t get what the whole Megyn Kelly thing is about. It’s just stupid.”

So what should be Fox’s next step? Well, as the underrated author Sotero Lopez once wrote, “I pay ZERO attention to what you say. But your actions have my undivided attention.”

Yes, the network statement is strong and doesn’t lack anything in the ambiguity department. But now it’s time for Fox go even further and not book Trump for any interviews for an undisclosed amount of time. No public announcement is needed… just simply eliminate his appearances for awhile. That’s not to say coverage as a whole still shouldn’t exist as it would for any leading and/or controversial candidate in the heat of the primary season. But as far as a platform for Trump himself, that should go away for the time being.

As we’ve seen, words alone don’t do much to a guy like him. Actions, however, do. On Friday night, Trump read Fox’s statement and — based on his response below — appears to have practically embraced it knowing that it only feeds into the desired persona he wants to project of being someone who doesn’t kowtow to anyone or anything, even a #1 cable news network.

"@Ma1973sk: Actually, no @FoxNews, @megynkelly has a sick obsession with Trump. Every day, every show, trashing, negative, hate.

As far as taking a hit in the ratings for not booking Trump for a week or two, simply refer back to the 9-month one-way battle with Kelly: Not having him on for interviews on The Kelly File hasn’t hurt the show. So… perhaps not having him on a network in a one-on-one capacity doesn’t automatically means it suffers.

Despite being more overexposed than Miley, Bieber and Kim K. combined, Trump coverage still rates like no figure since O.J. in cable broadcast history… nobody can dispute that. But his interviews are as repetitious as your average Nickelback album, as the subject predictably rattles off the same overarching campaign themes and latest poll numbers every time. In the end, Trump creates more news as a result of his Twitter feed and comments during rallies than anything he says in a Q & A with X, Y, Z host. Suspending interviews with him isn’t the self-induced punishment it would appear at first to be.

Take the next step, Fox. It may not hurt the numbers and will send a powerful message in the process: Needlessly attack one of our own, we simply stop giving you a direct line to millions of viewers.

Going down this road may appear risky. But in using Megyn Kelly’s success sans Trump as a guide, it ain’t so unfathomable… and will punch the stalker where it hurts in the process.