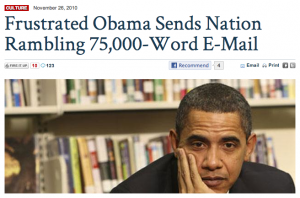 Most people recognize The Onion as the Peabody Award-winning satire machine that it is. Some people, however, don’t. Which is why we get a story like this every few months. Of course, it’s sometimes easy to mistake an Onion article for the real thing since the writers make sure to skew as close to their targets as possible. It also doesn’t hurt when real news outlets reprint the satirists’ work and decide not to let their readers know it’s a joke, as Fox Nation did today.

Yes, the Fox Nation editors were apparently so enamored with an Onion piece from today entitled “Frustrated Obama Sends Nation Rambling 75,000-Word E-Mail” that they reposted the first two paragraphs in their culture section with nary a sign as to its fictional nature. The only clue that this wasn’t real (besides a quick peek at your inbox to confirm that Barack Obama hasn’t been emailing you) was a link at the bottom instructing readers to go to TheOnion.com for the real story. This tiny link was, unfortunately, not enough for the vast majority of FN readers. At least, that’s the way it seems from the comments section.

“If this story is correct, that he did send out this email, it is very concerning about his current state of mental health. I am surprised he would be allowed to send something like this out and if he is not functioning very well why there isn’t some attention being paid to his current state.”

“Hey, you fraud: Get out. Your presidency is an affront to the exceptionalism of America. Pathetic loser.”

In fact, at the time of this post’s writing, you have to scroll through 20 comments to find someone who realizes the story’s fake. Five comments below that there’s actually someone (sarcastically?) saying they emailed The Onion for confirmation on the story.

Whether Fox Nation reposted this story without a disclaimer accidentally, as a prank, or because of something more sinister, we’ll leave up to you decide. However, Fox Nation should be aware that, sad as it may be, not everyone is familiar with the brilliance that is The Onion. And for every one of my aunts who forwards me this article today, I’m going to be very, very angry at them.

Here’s a screenshot of the post before it’s (hopefully) taken down. Click through twice to get full size: