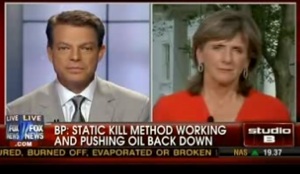 The news from the Gulf today is that the “Static Kill” operation has been successful and that the well is plugged and the oil dissipating although work is far from done. Shepard Smith, however, is skeptical and made that abundantly clear on today’s Studio B. With the director of the White House Office of Energy and Climate Change Policy, Carol Browner as his guest, Smith did everything but flat out accuse BP and the administration of lying about the clean up progress. Unsurprisingly, Browner was none too thrilled about the implication.

While Smith’s tone was pretty hostile from the beginning, it seemed that it was Smith’s invocation of the infamous “Mission Accomplished” slogan from the Bush years that really got to Browner. Interestingly, in a press conference earlier, Robert Gibbs also strove to stay away from the phrase.

“And I know you would forgive the good people in the Gulf South who feel like they’ve been lied to for so long that they can’t stand any more lies. Five years ago, ‘Help is on the way. Water’s around the corner.’ Now, there’s 205 million gallons of oil in the water but, ‘poof,’ it’s gone. They don’t believe the dispersant talk in large part. They don’t believe that the oil has evaporated. They believe that, if microbes are eating up the oil, that’s causing other problems. It almost feels like, in a political season, the administration is saying, ‘Move along,’ ‘Check mark,’ ‘Mission accomplished’ even. ‘Away we go.'”

This led into an impassioned speech from Browner about how she and the administration know that there is still work to be done and that they will be helping the Gulf for a long, long time. Eventually, tensions between Browner and Smith seemed to clear up but it was pretty heated there for a moment.