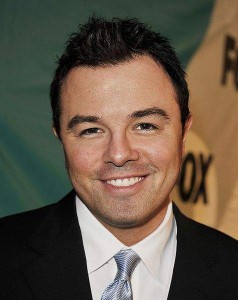 In an interview this month with Details, Family Guy creator Seth MacFarlane offers up his two cents on Arizona’s “Papers, Please” immigration policy and the ultimate fate of Prop 8 and civil rights. In typical Seth MacFarlane form, he didn’t mince his words, and, considering recent events, his take on immigration and gay rights seems particularly interesting.

Last week, District Court Judge Susan Bolton issued an injunction blocking key components of Arizona’s now infamous immigration bill, SB 1070. Last May, however, MacFarlane received a significant amount of attention for voicing in not-so-eloquent terms what a good number of Americans were already saying, comparing Arizona’s new immigration policy to Nazi Germany’s. While he admits the phrasing of his comment could have been better, MacFarlane says “the spirit of it is intact.”

It was odd to me that the Anti-Defamation League got so up in arms about that. They said, “How can you compare this to the Holocaust?” which seemed to me an utterly idiotic response. No one is comparing Arizona to the Holocaust. But in the 1920s, everyone thought the Nazis were a crazy fringe group that would vanish. So we’re saying, “Okay, here’s an example of something in its early stages—it could go nowhere; it could go somewhere very bad.” We point it out, and we’re attacked.

Perhaps more timely are MacFarlane’s comments on Prop 8 and gay marriage, considering that just today California courts overturned the Prop 8 ban on gay marriage. As far as MacFarlane is concerned, it was a no brainer, and anyone campaigning to keep the ban in place should have invested their money elsewhere.

The ridiculous thing about something like Prop 8 is that it will be overturned. They put something like $40 million into that campaign, and they might as well have just bet all that money on the Red Sox. It’s wasted money because that civil-rights battle will be won eventually. They’ll just have to sulk in a corner and accept the fact that gays will be able to marry each other. Every civil-rights conflict—black people, women—comes to an end in the right way.

Ultimately, Seth MacFarlane isn’t saying anything particularly new. But in a media world awash with pundits and ideology, an outside opinion (especially one from someone who makes a living out of comedy) is always refreshing.