From Serious to Sensationalism: Zimmerman Trial Shows Where Journalism Has Gone Since O.J.
column

From Serious to Sensationalism: Zimmerman Trial Shows Where Journalism Has Gone Since O.J. 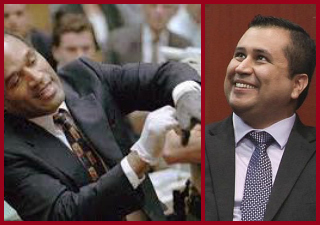 Approximately 11,000 black Americans have been murdered since Trayvon Martin was killed by George Zimmerman back in February of 2012.

And almost all—about 94 percent—were taken by members of their own race.

Yet here was America on a summer Saturday night in July, all glued to the cable news networks, watching the not-so-surprising not guilty verdict for George Zimmerman being announced to the world. Unlike the other 11,000, this murder was different, you see, because the media had succeeded in turning a self-declared Hispanic like Zimmerman into a guy whiter than Tim Tebow. Or as the New York Times should be granted a patent for inventing, a “white Hispanic.”

So this year’s Trial of the Century has mercifully ended. What will live on forever, however, is the new low some in the media reached in turning what was once just a local tragedy into a sensational frenzy. And in the process, the merger of tabloid journalism and hard news is now complete.

There was once a time when news organizations would barely cover a trial like Zimmerman’s. Don’t believe it? During a 2005 interview with PBS’s Frontline, here’s how Ted Koppel described the feeling among those at ABC’s Nightline regarding coverage another Trial of the Century:

Question: Do you remember how many shows you ran on the O.J. Simpson trial?

Koppel: “No, I don’t, but I do remember that we tried to avoid doing it too often, and we couldn’t avoid doing it almost once a week. What we would usually do is on a Thursday we would try to summarize everything that had happened in the trial up until then. It was impossible to ignore.”

Really? Once a week? Almost twenty years later, a government is overthrown in Egypt, and it couldn’t remotely budge the Zimmerman trial from dominating most of cable news since it began a few weeks ago. Could you image not hearing the name “Trayvon” for even ten minutes on MSNBC, FOX, CNN or HLN, let alone six whole days? And at last check, O.J. was one of the most famous (and beloved) people in the country for the better part of three decades (USC, Buffalo Bills, Monday Night Football, Hertz, and of course, the underrated and oft-injured Detective Nordberg of the epic Naked Gun trilogy), and not one, but two people were murdered in that case. All of that said, Koppel, as respected as they came in journalism, felt the trial was beneath hard journalism.

“The fascinating thing about it was that … every time we did O.J., the ratings went up ten percent. We could see it in the overnight ratings the next morning. And if we had done it every night, Lord knows what would have happened. But we thought once a week was more than enough.”

When it comes to ratings on the Zimmerman trial, ratings went up much higher than ten percent for the likes of HLN and CNN, particularly last week as the trial drew to a close. Per Variety Magazine:

MSNBC—who before the trial pinned its hopes for a comeback from the depths of 4th place in a four-horse race (partly because, you know…the network’s President declared it doesn’t do breaking news )—the loneliness of last place obviously continued. Maybe Americans didn’t trust the messenger there because of its painfully obvious pom-poms for the prosecution. For example, before the trial even began, Lawrence O’Donnell charged local police with a cover-up. Al Sharpton, who did wonders for Tawana Brawley’s so-called case back in the 80s, led Trayvon rallies and solicited funds on behalf of Martin’s legal team. And Joy Ann Reid isn’t a lawyer…she just plays one on TV. That is, if all the legal analysis she provided throughout the trial is any indication.

Meanwhile, the mothership of NBC News will have to deal with a lawsuit Zimmerman has levied against the network after one of its producers edited a tape down to portray the defendant as a blatant racial profiler, when it fact he was only answering a question from a 911 dispatcher that was conveniently left on the edit room floor.

Over on CNN, the network decided to go gavel-to-gavel on its coverage, putting the network in direct competition with, well, itself…in the form of trial-reporting specialist HLN. As mentioned earlier, both networks performed very well, with each seeing substantial ratings improvement as the trial wore on and thereby swapped daily and nightly second-place finishes (behind FNC) in the aforementioned four-way race.

The CNN coverage in particular was telling, as it may be more of a preview of the network’s already-increased focus on more human-interest stories (which has resulted in a ratings boost since the pivot began a few months ago), and a subtle decreased focus on international events that most Americans either don’t care about or really understand (broach Egypt like I did at a BBQ over the weekend…then sit back and enjoy the blank and/or apathetic stares).

When looking back on the trial and the vitriol it produced, it’s easy to argue that racial harmony in the U.S. took a few steps back. Social media hasn’t exactly helped the cause either. For whatever reason, wide receivers in the NFL always seem to be the most outspoken of any sport: Victor Cruz of the New York Giants tweeted shortly after the verdict that Zimmerman “won’t last a year before the hood catches up with him.” Roddy White of the Falcons instructed, “All them jurors should go home tonight and kill themselves for letting a grown man get away with killing a kid.” In a related story, the jury White wants to off themselves consisted entirely of women.

The days of lament in the media for covering sensational trials is now long gone. Per David Margolick of The New York Times from the same PBS piece that interviewed Koppel on media coverage of O.J.:

“One of the things for which my coverage (of the O.J. trial) is going to be most remembered — for better or for worse — is that I cited the National Enquirer once in one of my stories, and for The New York Times to acknowledge the National Enquirer was considered to be a kind of journalistic Rubicon. We had crossed some line, something fundamental had changed.”

There was once a time back in the late 20th century when there were some distinct differences between them.