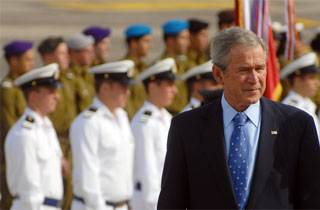 George W. Bush hasn’t commented on his successor’s politics and policies in the seven years since he left the White House. But he seems to have removed his self-imposed NDA, because during an off-the-record meeting with a group of Republican donors, Bush slammed Barack Obama, repeatedly, for his numerous missteps in the Middle East.

According to Bloomberg, who had someone transcribe his remarks to a session of the Republican Jewish Coalition’s annual meeting in Las Vegas, Bush argued that Obama was making America “retreat” from the rest of the world. For instance, how did he know that we could trust Hassan Rouhani, the president of Iran, who just hammered out a nuclear deal with America in exchange for us lifting Iranian sanctions? “He’s smooth,” Bush pointed out. “And you’ve got to ask yourself, is there a new policy or did they just change the spokesman?”

But worse than the Iran deal was Obama’s handling of ISIS, which Bush claimed he would have handed with more finesse:

Bush said he views the rise of the Islamic State as al-Qaeda’s “second act” and that they may have changed the name but that murdering innocents is still the favored tactic. He defended his own administration’s handling of terrorism, noting that the terrorist Khalid Sheikh Mohammed, who confessed to killing Wall Street Journal reporter Daniel Pearl, was captured on his watch: “Just remember the guy who slit Danny Pearl’s throat is in Gitmo, and now they’re doing it on TV.”

Obama promised to degrade and destroy Islamic State’s forces but then didn’t develop a strategy to complete the mission, Bush said. He said that if you have a military goal and you mean it, “you call in your military and say ‘What’s your plan?’ ” He indirectly touted his own decision to surge troops to Iraq in 2007, by saying, “When the plan wasn’t working in Iraq, we changed.”

“In order to be an effective president … when you say something you have to mean it,” he said. “You gotta kill em.”

Out of those two issues, Bush seems to think the Iranian nuclear deal was worse in the long term for Americans. “You think the Middle East is chaotic now?” he asked rhetorically. “Imagine what it looks like for our grandchildren. That’s how Americans should view the deal.”