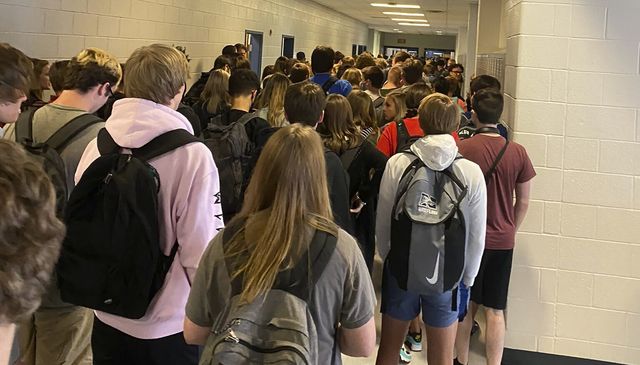 Two Georgia high school students were suspended for chronicling overcrowding and minimal mask-wearing in their school’s hallways during its first couple of days re-opening amid the Covid-19 pandemic.

“Day two at North Paulding High School,” 15-year-old Hannah Watters wrote on Twitter this week. “It is just as bad. We were stopped because it was jammed. We are close enough to the point where I got pushed multiple go to second block. This is not ok. Not to mention the 10% mask rate.” Watters also noted in a subsequent tweet that the crowding problems were occurring “even with split dismissal,” a staggered schedule policy that many schools have adopted to attempt to lessen crowding in hallways.

Day two at North Paulding High School. It is just as bad. We were stopped because it was jammed. We are close enough to the point where I got pushed multiple go to second block. This is not ok. Not to mention the 10% mask rate. pic.twitter.com/JKbGYqG9RS

This is what it looks like even with split dismissal. pic.twitter.com/erCA2lhOUb

In an interview with BuzzFeed News, Watters said she was suspended after the photo was shared by Twitter accounts with large followings and went viral.

“I used my phone in the hallway without permission, used my phone for social media, and posting pictures of minors without consent,” Watters said was the reasoning behind her suspension.

After the posts went viral, Paulding County School District superintendent Brian Otott penned a letter to his community defending his school’s policies relating to social distancing and mask-wearing, saying that the district does not enforce facial coverings, calling them a “personal choice.”

Still, Otott wrote, “[t]here is no question that the photo does not look good.” Otott did not address the students’ suspensions.

Online, people ripped the school for their decision to suspend at least two students over the images, calling it “terrible optics” and “absolutely outrageous.”

Breaking—the teenage student who whistle blew and took the photos of the Georgia high school without much masks—was just suspended by school. Terrible optics on part of the school. https://t.co/af7cDzCd9j

WOW. Amazingly it gets *even* worse.

Two Students Say They Were Suspended From Their Georgia High School For Posting Photos Of Crowded Hallwayshttps://t.co/9bkdU6di72

Next up at @pauldingboe: Students are suspended for texting to 911 when a school shooter starts blowing up the place because, you know, using a cell phone at school.

Alerting the world that you are setting these kids up for illness is justified. You fighting against that is not. https://t.co/adzEZQagnv

Principal Gabe Carmona has no business being around kids and should be immediately fired.

Students are now being suspended for taking pictures that paint schools in a bad light or posting on social media being critical about masks and school safety protocols. https://t.co/6JHXrWJnBZ

Suspending a student for exercising her First Amendment rights is absolutely outrageous.

“A 15-year-old student at North Paulding, Hannah Watters, was suspended for five days for posting images of the crowded hallways on Twitter” https://t.co/HeOwSyh9wM

So the Georgia school that claims it has no way to enforce a mask code just enforced a “phone code” against students who called for a mask code. You can’t make this stuff up. https://t.co/2Gc7HHrQtr