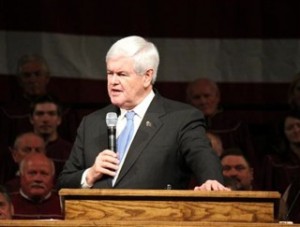 A reporter for the University of North Carolina’s paper, The Daily Tar Heel, wrote a piece describing an interview with GOP hopeful (he’s still in the race, in case you forgot) Newt Gingrich. While the student was told no topics were off limits, when Roger Ailes‘ remark about Gingrich came up, an aide immediately shot it down — cutting off the interview altogether.

The student, Memet Walker, had a private interview scheduled through Gingrich’s staff — “his aid gave no preconditions; no topics were off limits.” Wrote Walker:

That’s why I was so surprised when, before I had finished asking my first question, that same aid cut the interview short and prompted Secret Service to grab and briefly detain me as the former speaker was led away.

The unexpected reaction came in response to a question about Fox News chairman Roger Ailes. Last week, in a speech he gave at the University, Ailes had some harsh words for Gingrich, claiming the candidate was “trying to get a job at CNN, because he knows he isn’t going to get to come back to Fox.”

Gingrich was a former paid Fox News contributor. At a campaign stop in Delaware last week, he told supporters that Ailes’ network was biased against his campaign.

But before I even had a chance on Saturday to relay Ailes’ comments, his aid pressed his hands against me, and several Secret Service agents stopped me in my tracks.

“You’re not asking that. You’re done,” his aid said.

Walker was surprised that not only were they unable to respond to the question — but were surprised to have received it in the first place. “Next time,” Walker wrote, “I’ll just follow my instincts and ask about the moon colony.”