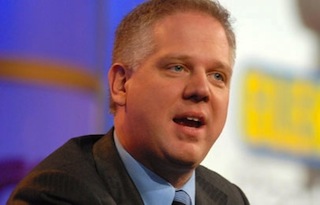 Earlier today, Glenn Beck made a call-in appearance to the radio show that holds his name. Bed-ridden thanks to a back injury, Beck had to be clued in on the show’s goings on by his usual co-hosts Stu Burguiere and Pat Gray. After Beck exclaimed admiration for Ron Paul’s speech last night, Gray and Burguiere let him know that they’d had a Paul fan call in earlier on the show who wanted to start talking about the Elders of Zion and Jewish conspiracies. All three hosts agreed that this type of fan would be Paul’s big obstacle going forward.

To begin with though, everyone on the show couldn’t help but point out that yesterday was a really good day for Ron Paul. Beck described Paul’s speech thusly:

Burguiere kicked in the accolades by pointing out that Paul was the only GOP candidate not to jump on the “Evil Rich Man” attacks on Mitt Romney.

However, once they got talking about the fringier elements amongst Paul’s supporters, the admiration ceased.

“What they’re doing to Ron Paul, these supporters like that,” said Beck. “Is they’re making him less attractive to the average person because no one wants to be in the crazy camp.”

Even more interesting is that Beck explained why he could relate to Paul. He pointed out that he’s also been accused of being a crazy conspiracist (despite everything he says being “absolutely provable”) because people focus on what a few crazy fringe elements were saying. Beck said that that was “the same thing” that’s happening to Ron Paul and argued that those people think they’re helping Paul but they’re just making it worse.

The hosts concluded that Paul’s supporters should “police” themselves and weed out the ones that are making them look bad.