Glenn Greenwald Fires Back At Rep. Peter King: Won’t ‘Deter Me, Limit Me Or Constrain Me In Any Way’ 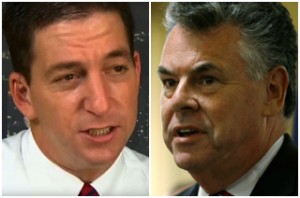 The Guardian‘s Glenn Greenwald saw Rep. Peter King (R-NY) call for his arrest today on Fox News, but he is refusing to be intimidated. The reporter who broke the NSA leaks with help from Edward Snowden says King’s comment are “not going to deter me or limit me or constrain me in any way from exercising my core First Amendment rights.”

Greenwald tweeted his initial response to King’s comments earlier this afternoon, calling the basis of his argument a “blatant lie.”

Later, in an interview with the Washington Post, Greenwald elaborated, claiming that King was misconstruing his and Snowden’s intentions. “We did not want to just go and arbitrarily disclose things for the sake of harming the United States,” he said. “[Snowden] wanted to trigger a debate and inform people. Given that he has access to incredible amounts of top secret information, if his intent at all were to harm the U.S., he could have disclosed enormous amounts of info that would have endangered all kinds of people. That’s the opposite of his intentions, and his actions prove that.”

Greenwald confirmed that he has spoken to lawyers and said “it would be irrational for me to dismiss the possibility” of prosecution after the Justice Department labeled Fox News’ James Rosen a “co-conspirator.”

The Post‘s Greg Sargent asked if Greenwald expected to receive support for congressional Democrats now that a Republican in the form of King has advocated for his prosecution. “I would think that even the most extremist Democrats on national security would be offended at the idea that journalists would be threatened with prosecution for doing their jobs,” Greenwald said. “If Democrats don’t stand for the principle that journalists can’t be prosecuted for doing this, then what do they stand for?”

The Guardian also released a statement in response to Rep. King, which is printed in its entirety below:

“We are surprised and disappointed by comments from Rep. Peter King R(NY), chairman of the House Subcommittee on Counterterrorism, saying “legal action should be taken” against Guardian journalist Glenn Greenwald for his reporting on NSA surveillance.

This is especially troubling in light of comments from Eric Holder, US Attorney General who stated: ‘As long as I am attorney general, we will not prosecute any reporter for doing his or her job.’ Holder went on to say he was ‘troubled by the possibility that leak investigations may chill the investigative journalism that holds government accountable.'”

In case you missed Rep. King’s comments, you can watch them in the video below, via Fox News: