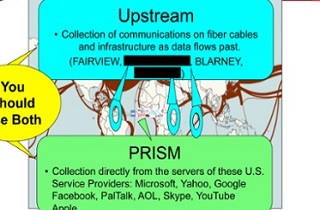 While the rest of the world plays “Where In The World Is Edward Snowdiego?”, The Guardian has quietly clarified a key piece of Glenn Greenwald‘s reporting, in comically aggressive/aggressive fashion. When news of the NSA’s Prism data collection program was first broken by Greenwald and The Washington Post‘s Laura Poitros, the “grabber” was that the spy agency had “direct access” to the servers of large internet providers. WaPo, however, backed off of this claim almost immediately, while The Guardian let it stand until today, when it left-cheek-sneaked out a clarification by other reporters.

Calling this a “clarification” is actually very generous, since Greenwald’s initial reporting on Prism gave the unmistakable impression that the NSA was jacking directly into the servers of companies like Google and Facebook, and that it collected information without authorization:

The National Security Agency has obtained direct access to the systems of Google, Facebook, Apple and other US internet giants, according to a top secret document obtained by the Guardian.

…The document claims “collection directly from the servers” of major US service providers.

…Companies are legally obliged to comply with requests for users’ communications under US law, but the Prism program allows the intelligence services direct access to the companies’ servers.

…But the Prism program renders that consent unnecessary, as it allows the agency to directly and unilaterally seize the communications off the companies’ servers.

…With this program, the NSA is able to reach directly into the servers of the participating companies and obtain both stored communications as well as perform real-time collection on targeted users.

There was even a slide that referenced “collection directly from the servers” of the companies. As it turns out, though, the slide was referring to a different kind of server, which I will let Bob Cesca (who flagged the correction) explain:

It sounds like an FTP server to me, not unlike Dropbox. This is how many of us transfer digital files that are too large for email. The NSA apparently doesn’t enjoy a free pass to directly grab up server data at will — instead, it merely downloads it from an FTP server (or similar) after it’s been placed there by the tech company that set it up for them. Again, this undercuts one of the most outrage-inducing aspects of Greenwald’s story, not to mention the initial Washington Post reporting as well. The NSA doesn’t have “direct access” to anything other than an innocuous file transfer “mailbox.” But “direct access” sounds sexier and therefore feeds the outrage agenda.

Cesca is suspicious of Greenwald’s agenda, for a number of reasons (as is The New York Times, apparently), but in his defense, the slide did say “directly from the servers,” and it’s possible that leaker Edward Snowden misunderstood the slide too, or failed to clue Greenwald in. I like to think the best of people.

What I find remarkable (and commical) is how The Guardian chose to correct the mis-impression it had given: by having a different reporter attack the internet companies with a barrage of scare-quotes:

The Guardian understands that the NSA approached those companies and asked them to enable a “dropbox” system whereby legally requested data could be copied from their own server out to an NSA-owned system. That has allowed the companies to deny that there is “direct or indirect” NSA access, to deny that there is a “back door” to their systems, and that they only comply with “legal” requests – while not explaining the scope of that access.

Yes, by saying “true things,” the companies were able to say other “things that were true,” which the Guardian “got wrong.” I’m not sure the “British” understand “scare-quotes.”

Cesca points out a number of excellent questions about Greenwald’s reporting, plus the “scoop” that he’s not just a down-the-middle reporter, which Greenwald has never pretended to be, but also that Greenwald is a self-confessed tech noob. Here’s hoping he asks Edward Snowden, who is not a noob, why he didn’t point this out to begin with.

By the way, the worst clarification ever was Howard Kurtz‘s initial revision to his later-deleted article on Jason Collins.