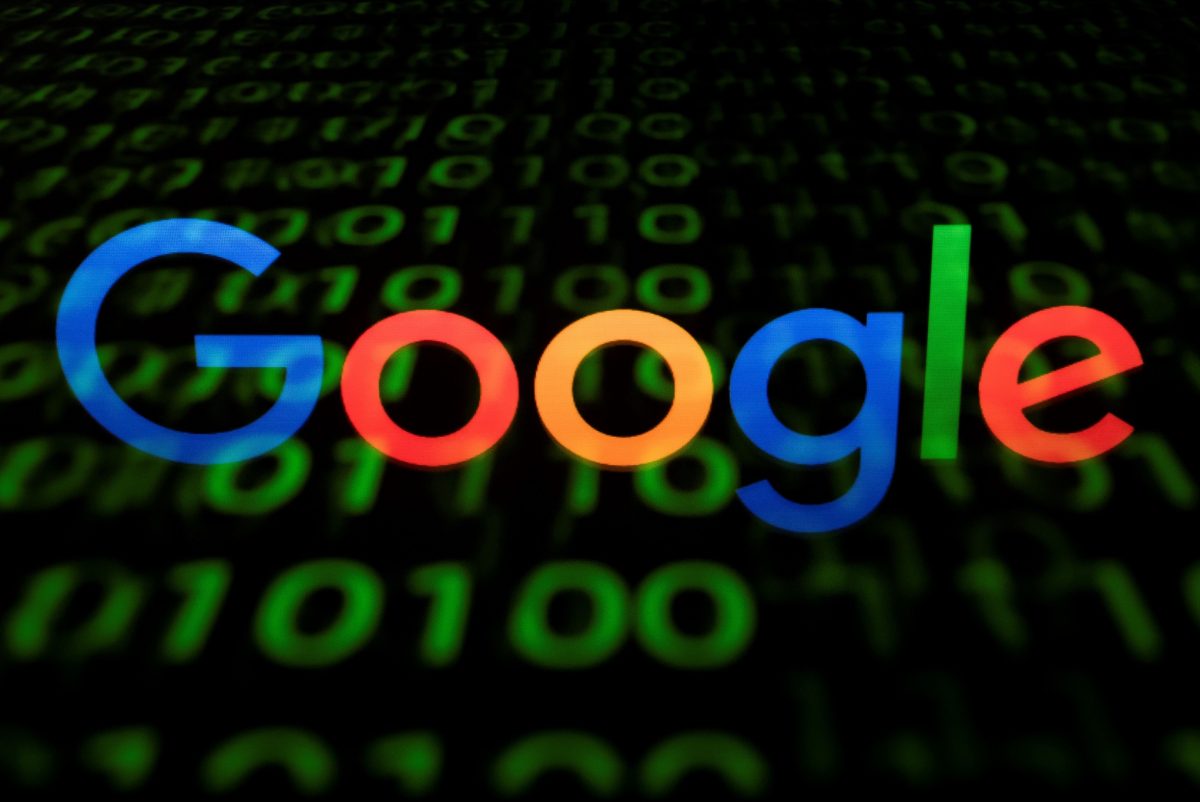 A week before the primary, Google listed “Nazism” as the first in a list of ideologies for the Republican Party of California.

The listing was in a section of search results called the Knowledge Panel.

It’s better to see than to read it explained. Here are screenshots, via Eric Wilson on Twitter: 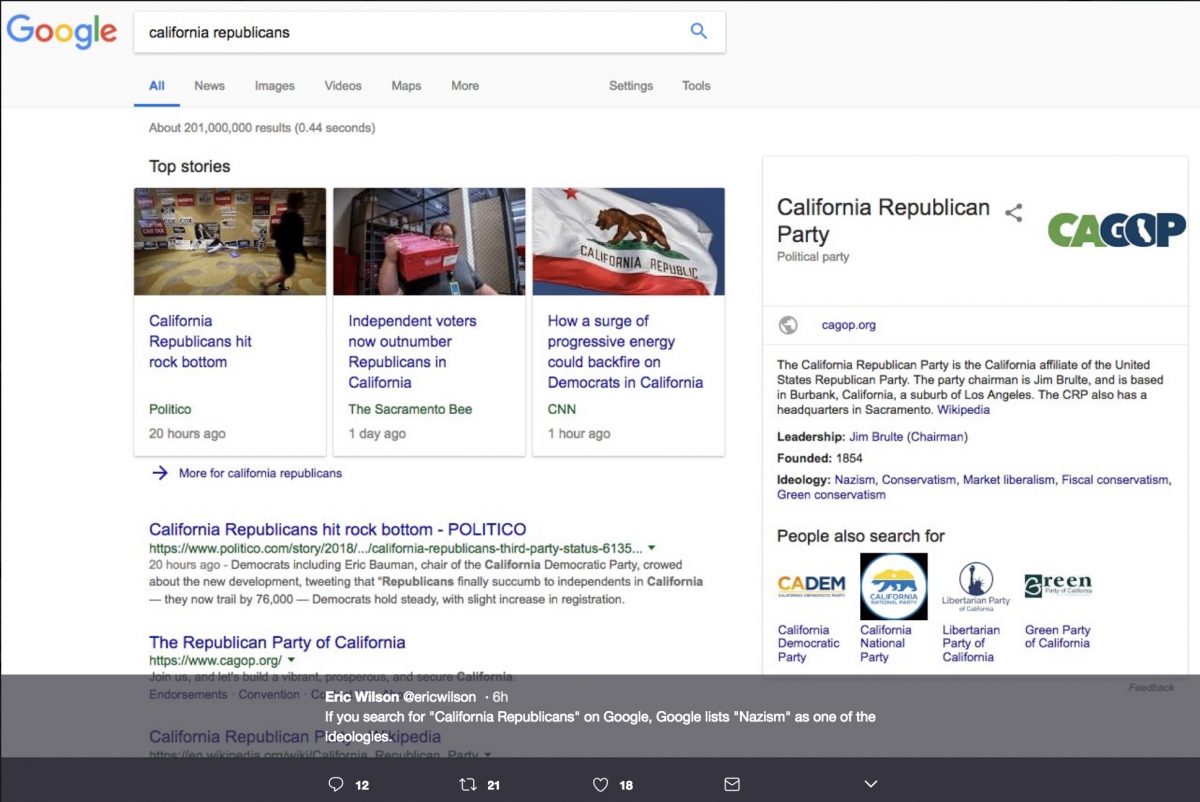 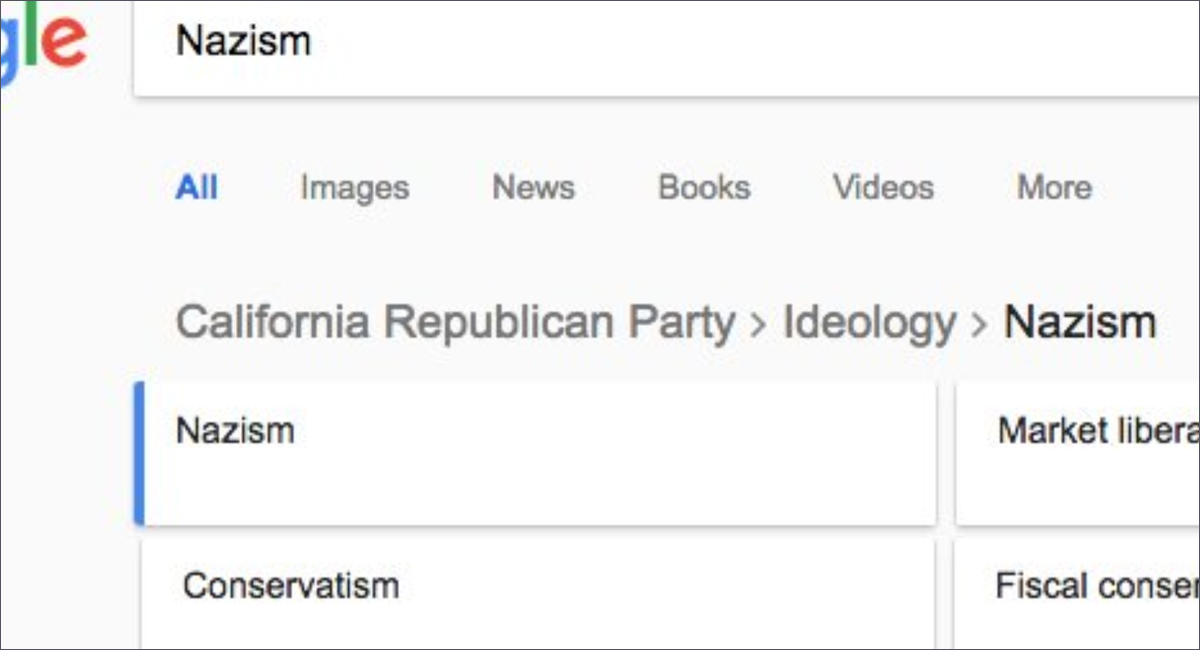 Sadly, this is just the latest incident in a disturbing trend to slander conservatives. These damaging actions must be held to account. #StopTheBias https://t.co/6ztyuc772s

Fox News spoke with a Google spokesperson regarding the error after the story was first picked up by Vice.

When reached for comment, a Google spokesperson told Fox News the error was likely the result of vandalism on one of its sources.

“This was not the result of any manual change by anyone at Google. We don’t bias our search results toward any political party. Sometimes people vandalize public information sources, like Wikipedia, which can impact the information that appears in search,” the spokesperson said via email.

The spokesperson continued: “We have systems in place that catch vandalism before it impacts search results, but occasionally errors get through, and that’s what happened here. This would have been fixed systematically once we processed the removal from Wikipedia, but when we noticed the vandalism we worked quickly to accelerate this process to remove the erroneous information.”

Vice described how the panel works, explaining that it is “automatically populated from a variety of sources, including Wikipedia” and that this is what probably led to “vandalism” of the information.

They also checked on the “related content” idea some have offered thanks to a white supremacist who tried to run for office as a Republican but was kicked out of the convention.

A neo-Nazi running for Senate in California attracted a lot of headlines earlier this year, including when the state’s Republican Party kicked him out of its convention in May, but the first “Google News” results for “California Republicans” do not discuss him either.

This kind of vulnerability to manipulation is among the reasons conservatives often cite when stressing the need to reform practices at tech companies in search and social media businesses.

“Google owes conservatives answers and assurances that they are putting an end to this,” McDaniel said in a statement to VICE News. “Evidence is mounting that conservative voices are either being suppressed or, as it appears in this case, being falsely depicted as hateful extremists.”

Although the error has been corrected, for Republican political strategist Wilson there is one task still remaining to Google.