Over at the Daily Caller, Betsy Rothstein spotted an interesting little bit of Google trivia: The search engine giant’s definition of the word “bigotry” includes a reference to “right-wing” beliefs.

When you type single words into the Google search bar, the engine often provides a dictionary definition of that word. When “bigotry” is typed in, here’s what you get: 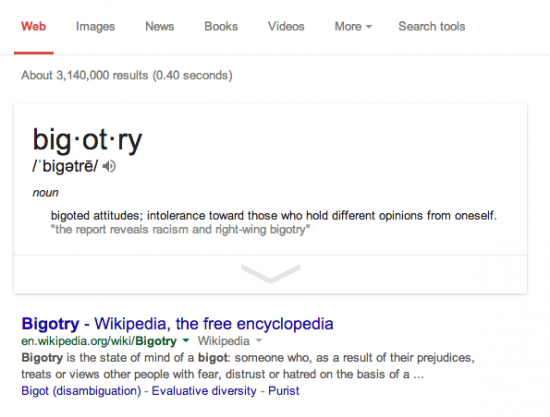 As you can see, the lead example is: “The report reveals racism and right-wing bigotry.”

Now before this becomes yet another reason for conservatives to lash out at Google, here’s why this sentence comes up: It’s likely auto-generated from the Oxford Dictionaries.

In fact, the definition that appears on Google is word-for-word the same as the one you’d find on the Oxford page.

Other example sentences from Oxford: “There is nothing amusing about snobbery, racism, bigotry, misogyny and xenophobia,” “Intolerance and racial bigotry is a destructive force that can create tensions in local communities,” and “Empty churches may well be empty because of the image that we are presenting narrowness and bigotry and prejudice.”

So I guess this means if the outrage mob decides to wage war against someone for this, it would be against Oxford Dictionaries; not Google.

By the way, while we’re all here talking about nothing, take a look at this fascinating graph from Google:

So even though our political discourse is full of people throwing words like “racist,” “sexist,” or “bigot” at each other… use of the word “bigotry” has fallen drastically over the last two centuries. Perhaps because we’ve just found new ways to describe the actions of bigoted people.

News you can (probably never) use. Happy Friday.

UPDATE — 5:08 p.m. ET: Rothstein got comment from Google, who confirmed my suspicion that it’s simply an aggregation of Oxford dictionaries:

Google responded to The Mirror at 4:51 p.m. A spokesperson said, “Google Search surfaces data from Oxford Dictionary when providing definitions on our search result pages.” What’s more, we hear Google plans to reach out to Oxford Dictionary to flag the above “right-wing bigotry” sentence as inappropriate.

UPDATE — June 20, 2014, 9:00 a.m. ET: The Google definition has officially scrubbed all reference to the sample sentence that mentioned “right-wing” bigotry.