GOP Ripped For Attacking Admiral William McRaven: ‘The Depths to Which the GOP Will Sink’ for Trump… 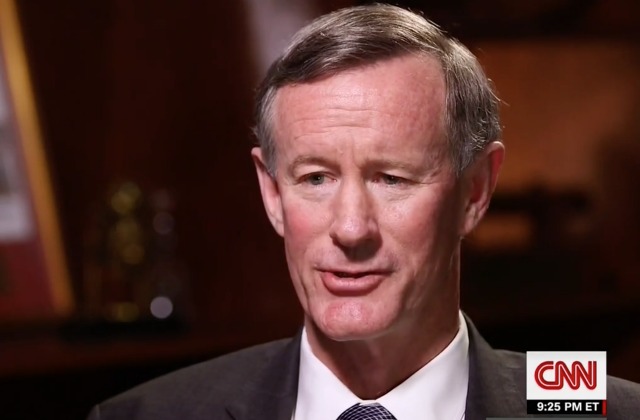 “Worth noting after recent comments: Retired Adm. William McRaven was reportedly on Hillary Clinton’s short list for Vice President in 2016,” the GOP tweeted. “He’s been critical of President @realDonaldTrump— even dating back to the 2016 campaign. He’s hardly a non-political figure.”

Worth noting after recent comments: Retired Adm. William McRaven was reportedly on Hillary Clinton’s short list for Vice President in 2016.

He’s been critical of President @realDonaldTrump— even dating back to the 2016 campaign.

The beef between McRaven and Trump began after the former admiral said the president’s attacks against the press are “perhaps the greatest threat to democracy in my lifetime.” Trump appeared on Fox News Sunday and responded to these comments by criticizing how McRaven handled the hunt for bin Laden and calling him a Hillary Clinton supporter.

McRaven has since responded to Trump in a statement, saying,  “I did not back Hillary Clinton or anyone else. I am a fan of President Obama and President George W. Bush, both of whom I worked for.”

“I stand by my comment that the President’s attack on the media is the greatest threat to our democracy in my lifetime,” he added. “When you undermine the people’s right to a free press and freedom of speech and expression, then you threaten the Constitution and all for which it stands.”

Media figures, pundits, and other notable Twitter users were quick to slam the GOP for targeting the 37-year SEAL veteran:

If you had told me two years ago that the official GOP twitter account would be attacking *Bill McRaven* as a partisan hack, I would have said you were out of your mind.

I love it when Republicans pretend there’s nothing wrong with Donald Trump at all, and he should be above criticism. LOL.

There are members of Congress who don’t speak out against the president because they don’t want to become a target of his. Here’s why…now the official GOP account is attacking Admiral McRaven pic.twitter.com/BTyKQR4RS6

Worth noting: Being on a media VP list doesn’t make you a Clinton/Obama backer — as Trump incorrectly alleged in his interview.

McRaven, as chancellor of the University of Texas System, was neutral in the 2016 presidential race. https://t.co/Lgqb0jqJkL

Thank you, Admiral #McRaven, for leading our military and the mission to kill America’s number one enemy. #GiveThanks https://t.co/CsiexbsdnW

Worth noting that McRaven forcefully shot down those rumors as soon as they emerged.

Worth noting the depths to which the @GOP will sink in attempting to justify the President’s despicable smear of yet another American hero. https://t.co/BNwakq3n9y

worth reflecting on what McRaven’s criticism says about Trump and about you https://t.co/yqzysBOSd4