Greenwald: Liberal Pundits Are Trying to Delegitimize All Critical Reporting on Clinton 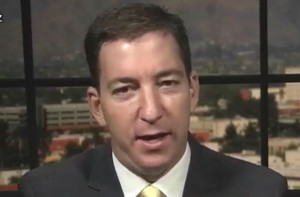 A recent trend toward amongst more liberal pundits and reporters in critiquing the coverage of the presidential race is really bothering The Intercept‘s Glenn Greenwald. Paul Krugman went after the media this week not just for being too soft on Donald Trump, but for being way too tough on Hillary Clinton.

Greenwald, in a piece for The Intercept earlier this week, dryly dismissed the idea that taking this stance is somehow “brave” of Krugman, saying, “Thankfully, it appears that Krugman — at least thus far — has suffered no governmental recriminations or legal threats, nor any career penalties, for his intrepid, highly risky defense of Hillary Clinton.”

But Greenwald is a little alarmed about how Krugman’s words feed into this trend of liberals being quick to dismiss or discredit any critical reporting of Clinton:

[A]ggressive investigative journalism against Trump is not enough for Democratic partisans whose voice is dominant in U.S. media discourse. They also want a cessation of any news coverage that reflects negatively on Hillary Clinton. Most, of course, won’t say this explicitly (though some do), but — as the wildly adored Krugman column from yesterday reflects — they will just reflexively dismiss any such coverage as illegitimate and invalid.

1) A whole lot of Hillaryheads just don't seem to get why this attitude is so fucking obnoxious. It demands silence. pic.twitter.com/bAKZObN1W2

“It would be journalistic malpractice of the highest order if the billions of dollars received by the Clintons — both personally and though their various entities — were not rigorously scrutinized and exposed in detail by reporters,” Greenwald said. “That’s exactly what they ought to be doing. The fact that quid pro quos cannot be definitively proven does not remotely negate the urgency of this journalism.”

He makes it clear over and over in his piece that he’s not saying he likes Trump or anything (as he’s been accused of before), he just thinks that Trump’s awfulness doesn’t negate Clinton’s.