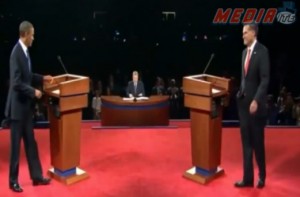 The internet is going all Zapruder on Mitt Romney, insisting that a slow-motion review of the opening second from Wednesday night’s debate shows that the former Massachusetts Governor came to the stage with more than just his wits and a Costco-sized pack of lies. In several videos, internet sleuths claim Romney can be seen removing a cheat-sheet from his pocket, and tossing it on the podium. The Romney campaign, however, says that the object in question was a handkerchief, which Romney can be seen using later in the debate, but isn’t that just what a cheating cheater would say?

The conspiracy theory, which resembles the “controversy” surrounding George W. Bush‘s first 2004 debate that supposedly had him wearing a communications device so large that it would’ve had to have been made by Alexander Graham Bell, is based on this slow-motion clip from Wednesday night’s debate:


As Wonkette‘s Rebecca Schoenkopf points out, pre-written notes were not allowed at the debate. A diarist at Daily Kos works through the possibility that it could have been a hankie:


Mitt takes something out of his pocket and tosses it on the podium.  It seems as if he maybe using his body to try and screen the movement…

Yes it could be a hanky.  But it falls kind of heavy, and stays uniform in it’s fold.  Plus it is flat.  I have never seen a man’s hanky be so uniform and flat coming from a front pant’s pocket.  Back pocket, yes, breast pocket in a jacket, yes.. but not the front pant pocket.

He was also wearing make up and to wipe any sweat from his face with a hanky would have taken off his make up.  Plus remember that old saying “Never let them see you sweat?”  If he was seen to wipe sweat from his brow, the optics would have been very bad (“Obama makes him nervous, he can’t stand up to him.”)

It’s steel-reinforced logic, that, because paper is a lot heavier than cloth, and doesn’t get wrinkled in your front pocket. Besides, if Romney were really worried about sweating, he could simply have his campaign staff disable that functionality.

Defying all belief, however, the Romney campaign told Buzzfeed‘s Andrew Kaczynski “It’s a handkerchief,” missing a golden opportunity to follow up with “You thought there was a cheat sheet on it, but it’s snot.”

Also cutting against the cheat-sheet theory is the fact that, as anyone who watched the debate will tell you, Romney kept his eyes locked on President Obama like Superman trying to see through lead panties. If anything, I’m inclined to believe it was a handkerchief, and that Romney soaked it in chloroform and shoved it over the President’s face when no one was looking.

Still, my favorite part of this story, other than the fact that the debate might not even matter anymore, is the last 30 seconds of the video Buzzfeed used, which looks like the start of an awesome gunfight scene from a John Woo flick. Check it out: