Have A Look: Here’s The Letter Gov. Jan Brewer Handed To President Obama

Have A Look: Here’s The Letter Gov. Jan Brewer Handed To President Obama 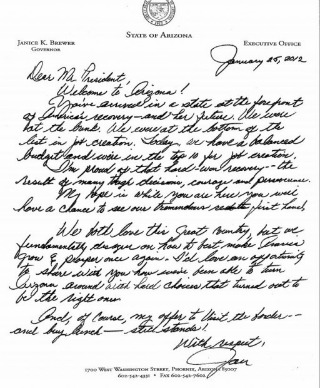 If you’ve been following the story concerning Arizona governor Jan Brewer and President Barack Obama, you’ll recall that Brewer mentioned having handed the President a letter about Arizona’s economy right after he deplaned.

The two would later enter into a heated discussion over Brewer’s depiction of the President during a previous meeting about border security, resulting in a much-distributed photo of Brewer wagging her finger close to the President’s face.

I’m proud of that hard-won recovery — the result of many tough decisions, courage and perseverance.

My hope is while you are here you will have a chance to see our tremendous results first hand.

We both love the great country, but we fundamentally disagree on how to best make America grow and prosper once again. I‘d love an opportunity to share with you how we’ve been able to turn Arizona around with hard choices that turned out to be the right ones.

And, of course, my offer to visit the border — and buy lunch — still stands!