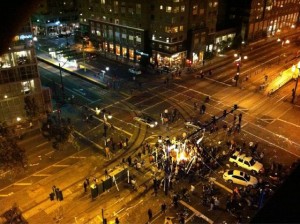 Over the past few years, everyone (except Malcolm Gladwell) has been captivated by the ideas of what social media can do for political change, how the amazing democratization of free, instantaneous communication could be employed to change the world. In Moldova, protests using the internet for organization were called the Twitter revolution. In Iran, people wondered if social media would destroy a disputed election. And, in America, on the eve of Midterm decisions that could change the very direction of our nation, baseball fans checked into Foursquare to let people know where the best riots in San Francisco are. Oh well, we’re serious about our national past time. No, not baseball. Sharing too much information on the internet.

Yes, after the Giants won the World Series last night, many fans began to show their appreciation for the victory by taking to the streets, lighting some fires, stealing fire hoses, and generally having a good, riot-y time. The whole situation was exhaustingly reported on and captured via social media sites which is pretty fascinating…but Foursquare? That just seems like a bad idea. Of course, this writer has always found Foursquare a little odd. Posting your exact location on the internet at all times just seemed to be inviting crime. I just never figured it would go the opposite way too and that people would be “checking in” while they actively committing crimes. 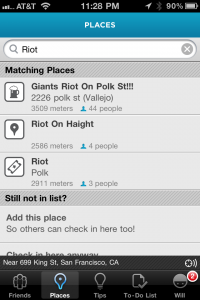 Well, thus is the story of all great innovations; one step backwards after every mighty leap forwards. For every open sourced, user generated encyclopedia of heretofore unthinkable breadths of knowledge, there’s a depository of LOLCats images. For every idea that revolutionizes the very concept of shopping, there’s a dude pretending to be a Nigerian prince. And, for every Twitter Revolution, there’s a bunch of drunk fans tweeting where the most flippable cars are.