Here We Go Again: President-elect Trump Is Already Contradicting Himself on Twitter

Here We Go Again: President-elect Trump Is Already Contradicting Himself on Twitter 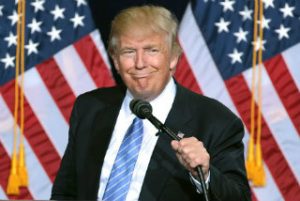 It has only been a few days since Republican nominee Donald Trump was officially named President-elect of the United States with his stunning upset victory over the heavily-favored Hillary Clinton. And while there were many indications that perhaps his staff had revoked his Twitter privileges in recent weeks, it would certainly seems as if our future Commander in Chief is back to his favorite social media.

Last night, President-elect Trump criticized (GASP! He what?!) the growing chorus of protestors who have gathered in cities around the country to speak out against his election.

Just had a very open and successful presidential election. Now professional protesters, incited by the media, are protesting. Very unfair!

“Very unfair!” he wrote on Twitter, despite the fact that protesting is a Constitutionally-protected civil liberty shielded by the First Amendment. The President-elect even went as far as to label those upset as “professional protestors, incited by the media.”

However, it would seem as if someone (ahem, Kellyanne Conway) informed him that the protestors are very much real, very much angry, and very much his Americans.

He awoke this morning in Trump Tower and fired off an update of sorts, completely contradicting his position from last night about the protests.

Love the fact that the small groups of protesters last night have passion for our great country. We will all come together and be proud!

Trump now claims that he appreciates those protestors “who have passion for our great country.”

As my colleague Josh Feldman wrote last night, “Get ready for four years of this, everyone…”