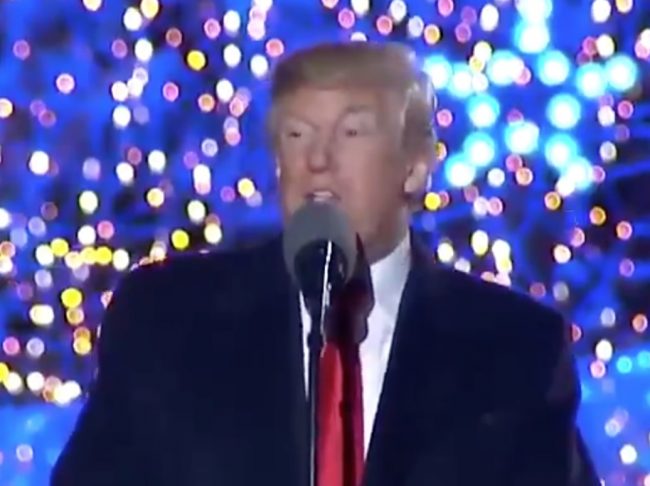 President Donald Trump and the first family attended the National Tree Lighting ceremony in Washington on Thursday before a crowd of…well…let’s see:

The National Tree Lighting ceremony was beautiful this evening – but hard not to notice the empty seats. #Christmas #DMV #USA pic.twitter.com/oKMrnnBekG

The parallels to the Inauguration were obvious. And Twitter, which seldom disappoints, was all over it. Here’s a sampling of the social media reaction:

This is the largest crowd that has ever attended a National Tree Lighting in history. Period! https://t.co/vfo1UjcgGP

It’s a warm and pleasant night in DC https://t.co/KA2WdWiztB

So much for putting the Merry in Christmas, eh @realDonaldTrump? At least you’re being consistent. Your Inauguration numbers compared to President Obama’s were also anemic. Sad! https://t.co/pkGM86Sqxz

Reminds me of some other events Trump has hosted.

The crowd for the National Christmas Tree lighting by Trump looks about the same size as for his inauguration. pic.twitter.com/HYBkKD9piX

Biff will be really, really upset if we retweet this photo of empty seats at his first tree lighting ceremony. So don’t retweet and tag @realDonaldTrump. https://t.co/OCHJCkogQC

Based on all the empty seats at the National Tree Lighting, it seems Trump tried to make good on his promise to bring Christmas back to Washington and Christmas said “no thanks”.

Hard not to see this–and whatever lie Trump tells about the size of the crowd–as an emblem of America now. https://t.co/k1xvPnzTqo