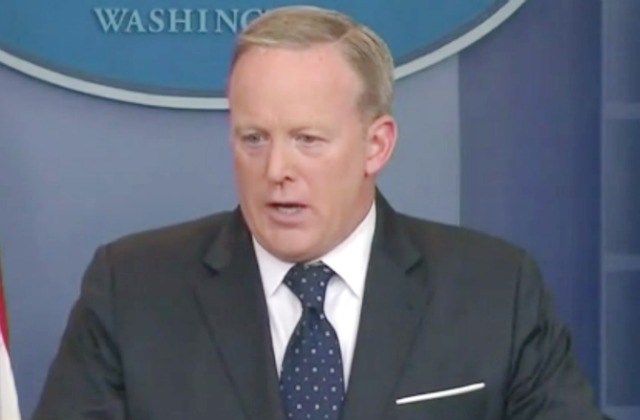 One of the biggest revelations in the bombshell new report about a lawsuit making some serious allegations about Fox News’ Seth Rich coverage was that Sean Spicer met with the two men pushing the conspiracy theory.

NPR’s report reveals that Spicer confirmed meeting with Rod Wheeler and Ed Butowsky a month before the Fox story on Rich ran:

According to the lawsuit, Trump’s press secretary Sean Spicer met at the White House with Wheeler and Butowsky to review the Rich story a month before Fox News ran the piece…

Spicer admits to meeting with the two but denies claims about the president.

“Ed’s been a longtime supporter of the president and asked to meet to catch up,” Spicer told NPR on Monday night. “I didn’t know who Rod Wheeler was. Once we got into my office, [Butowsky] said, ‘I’m sure you recognize Rod Wheeler from Fox News.’ ”

Spicer said Butowsky laid out what they had found about the case. “It had nothing to do with advancing the president’s domestic agenda — and there was no agenda,” Spicer says now. “They were just informing me of the [Fox] story.”

Just a month later, when the Fox report dropped, Spicer was asked to comment on it and said this:

Spicer asked about story on May 16: “I’m not aware of that.” https://t.co/eHxGdLfAkq