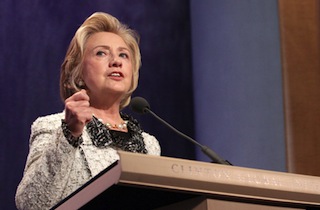 At an event in Denver Clinton was asked her opinion of the deal, which has come under scrutiny for everything from Bergdahl’s potential deserter status at the time of his capture to the legality of the Obama administration’s decision not to inform Congress thirty days ahead of a prisoner swap.

RELATED: Cheney: These Gitmo Detainees Will Return to Battle and We Will Pay a Price

“You don’t want to see these five prisoners go back to combat,” Clinton said. “There’s a lot that you don’t want to have happen. On the other hand you also don’t want an American citizen, if you can avoid it, especially a solider, to die in captivity. I think we have a long way to go before we really know how this is going to play out.”

She added that the decision to spring Bergdahl could be seen as the type of “hard choices” that happened to be the title of her new book, at which point everybody ducked.