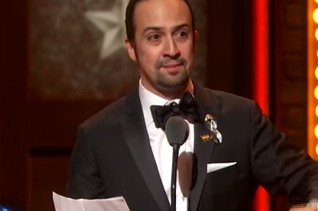 If Hillary Clinton is looking to add some razzle dazzle to the Democratic National Convention in July, she might as well shoot for the stars. Actually, Clinton’s got her eye on one of the brightest stars in the sky at the moment, and she’s hoping to convince him to grace the event with a show.

Democratic operatives have recently spoken with Politico, and they reported this morning that they are trying to recruit Hamilton creator Lin-Manuel Miranda to appear at the Philadelphia convention. The move is almost certainly an effort to reach out to younger, diverse voter groups, as well as to counterbalance the spectacle Donald Trump is undoubtedly preparing for the GOP convention in Cleveland the week before.

Miranda is an obvious A-list celebrity choice for Clinton, seeing as his ticket prices continue to increase as he moves closer to his final performance on July 9. The Hamilton star has been politically involved before, having appeared for a show at the White House, and subtly speaking out against Trump’s anti-immigration rhetoric.

Miranda has plans to film a remake of Mary Poppins in London during the convention, so it remains to be seen whether he will actually make it to Philadelphia. Miranda’s father has denied the rumored efforts to recruit his son, and DNC and Clinton have yet to respond directly. Though, if Miranda does make it to the convention, Clinton may want to avoid any “off-color” jokes with the Hamilton star.