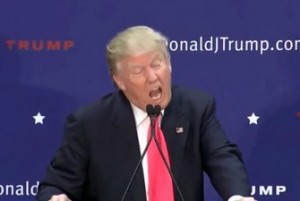 Pro-Hillary Clinton SuperPAC Priorities USA just released a new ad that shows women lip-synching to incendiary Donald Trump quotes about women, but as Trump pointed out on Twitter Tuesday morning, not all of the quotes were actually about women. “The pathetic new hit ad against me misrepresents the final line. You can tell them to go BLANK themselves’ – was about China, NOT WOMEN!” Trump tweeted.

Setting aside the efficacy of a defense that concedes every other misogynistic quote in the ad, Trump is wrong about the subject of his profane line, which was not about China, but about American companies that wish to return to the United States after relocating business to Mexico. At the time, Trump claimed he hadn’t actually used the expletive, but enhanced audio shows that clearly, he did:

Trump’s misremembering of the quote’s provenance conveniently papers over its contradictory message to companies he’s supposed to be trying to woo back to the US, but in the end, this is a ridiculously stupid unforced error by Priorities USA. Given the embarrassment of riches where Trump quotes about women are concerned, it’s inconceivable that they couldn’t fill a 30-minute ad with the genuine article, let alone a 30-second spot. As a result, Trump will get a lot more mileage out of this than they will.