How Old Is Too Old? AP Tries To Figure Out The Wire In The Twitter Age

How Old Is Too Old? AP Tries To Figure Out The Wire In The Twitter Age 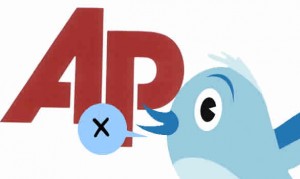 If the email they sent earlier this week is any guide, the Associated Press is waking up to a dramatically changed and deeply jarring media landscape, one in which it’s nearly impossible for a once-leading institution to stay absolutely in front on the news.

It’s ground others have walked before. The New York Times already realized its difficult position when it was presented with one of the more biting and incisive critiques of traditional media: “Why is aged news better than real news?”

If you can’t place it, it’s from Jason Jones‘ 2009 Daily Show segment in which he tours the “Colonial Williamsburg” that is the archaic Times newsroom. Jones, sitting across from the paper’s Assistant Managing Editor Rick Berke, asks him the question at the three-minute mark below.

A pause. Berke: “Not necessarily.”

Which is when Jones goes in for the kill. “Give me one thing in there that happened today.” It’s a cheap shot that has its intended effect. Berke fumbles, can’t answer. The problems of the Times in 2009, captured perfectly.

Jones’ question takes advantage of the vagaries of meaning. “News” isn’t just about being new; even in the glory days of the newspaper, turnaround time was measured in hours. “News” is two things: recent information and new information. It’s currency and context. It’s the balance noted in Cronkite’s adage: “Get it first, but get it right.”

On Wednesday, the AP sent that email, taking issue with tweets from AP reporters that preceded that news being released on the AP wire. In their words: “we’ve had a breakdown in staff sticking to policies around social media and everyone needs to get with their folks now to tell them to knock it off.” The social media policies, as New York‘s Joe Coscarelli points out, state, “Don’t break news that we haven’t published, no matter the format.” This goes beyond exclusives (which is what the AP’s email was about.) Reporters breaking news of any kind on Twitter is against the rules and – more worrisome to the AP – devalues the wire service.

Getting it first has always been a large part of the value proposition for the AP. The AP wire was once issued over teletype, sending out news flashes (“KENNEDY SERIOUSLY WOUNDED—“) as they occurred. In 1963, it was Twitter, verified. People paid the AP to get it first.

Part of the AP’s problem is that people still do, even while – like newspapers – the AP’s value as an engine of speedy news has been eroded. News turnaround time is now measured in seconds. (Or less – during the Occupy protests, for example, people flock to livestreams where they expect news to happen.) Someone else has always had the story first – the person involved in the crime, for example. The difference now is that he can immediately reach a global audience through the web. How does a wire service compete with that?

Anthony DeRosa – social media editor at Reuters, a direct competitor of the AP – asked that question in response to the AP email.

Do we want to serve the wire above all, since our paying customers deserve to get that information first? Yes, we do. But we can do that without sacrificing the incredible value we create by making ourselves a must-follow on all social networks because of the information we provide and two way conversations we can have with our readers.

DeRosa suggests, in part, that the wire needs to speed up, to match the ability to break news over Twitter. But Reuters and the AP can never break news faster than Twitter, or another web tool – they aren’t built to be tech innovators, and they don’t employ the entire world as reporters. The AP’s email was about scooping the wire on Twitter. Should a reporter save an exclusive for the wire? Yes. Should a reporter avoid a retweet in order to post to the wire first? No.

The wire, instead of being a breaking news feed, should immediately evolve into a validator. This is what humans like DeRosa and NPR’s Andy Carvin already are: a blend of breaking news mavens (often, via retweet – another target of AP restriction) and validators for news that’s floating around. When Carvin or DeRosa do this, it doesn’t carry the weight of NPR or Reuters – but there’s little reason why it shouldn’t.

The wire services have lost the race for speed. But there’s still value with a revised mantra: get it right first. The AP has the resources to do what DeRosa and Carvin do, quicker: develop tools to validate and promote tweets, share developing information in real-time, give the imprimatur of authority when applicable. Mistakes can and will be made – but mistakes are made anyway. Remember NPR’s Giffords call? An error, a correction, an apology. Even within the more luxurious constraints confines of a daily paper, errors happen every day.

At its heart, the AP’s concerns aren’t technological – they’re existential. It’s an organization with an enormous reserve of valuable assets but a soft spot for its history. Newspapers had to learn that they weren’t in the paper delivery business. The AP needs to learn it’s not in the breaking news first business. An insistence on battling the inevitable makes the organization look not only unresponsive, but hamstrung – and continuing to futilely push back on criticism will continue to backfire.

No rules about the use of Twitter can make it otherwise.