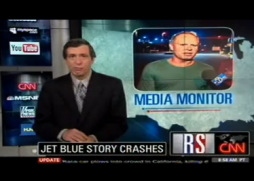 Howard Kurtz hates shark week. Kidding! Howie Kurtz simply does not approve of either Steven Slater nor the adoring coverage he received at the hands of the media. Especially the latter. Kurtz saved his Slater rant for the last few minutes of Reliable Sources today, the gist of it being that Slater could have killed someone, and the media has gone overboard in their coverage of his antics (cue: “those darn kids!”).

And here’s what left me with motion sickness: this JetBlue clown, the flight attendant who got ticked off at a passenger, then triggered the emergency chute at JFK Airport and slid his way out of a job and got himself arrested is actually being celebrated by the media.

Yes, the media went overboard — as much as I enjoyed their coverage, by the end of the week the NYT appeared to have made Stephen Slater their personal mascot. However, in the grand scheme of overdone stories this year (and make no mistake this has been a banner year), overdoing a story 98% of the country enjoys hearing about seems to me to be a lesser sin than say, a beer summit clock. Watch Howie rain on Slater’s media parade below.