Huckabee at Pro-Life Gala: Opposing Abortion Is ‘How We Win Elections’

Huckabee at Pro-Life Gala: Opposing Abortion Is ‘How We Win Elections’ 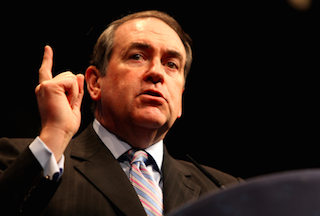 Less than two months after Mike Huckabee ignited a major controversy by saying Democrats think women “cannot control their libido or their reproductive system without the help of the government,” the Fox host and former GOP presidential candidate spoke at the pro-life Susan B. Anthony List’s annual gala. During his remarks, Huckabee urged Republicans not to “abandon” the abortion issue, saying “that’s how we win elections.”

“This is not an issue that we should abandon,” Huckabee told the crowd, who paid $250 a head to attend the event. “I have a moral obligation before God and a political obligation unto the Declaration of Independence and our constitutional form of government to believe that that life is a life worth living and a life worth protecting. We can run the full gambit of what we believe, we don’t have to reduce down to one flavor. That’s not how we lose an election. That’s how we win elections and it’s how we save this republic.”

“I don’t have to quit being pro-life and pro-family to believe that the government should take less money from each family,” he said later in the speech. “I did not become pro-life because I got into politics. I got into politics because as a pro-life person I believe if we get this issue wrong we will get all the other issues wrong.”

In addition, Huckabee drew laughs from the crowd by comparing the act of terminating a pregnancy to eliminating the inconvenience of elderly parents. “If we teach the generation coming after us that it’s okay to terminate a human life because it represents a financial hardship or social disruption, what are we telling them?” he asked. “We’ve already given them the full capability to take us out. Now, I’m not going to make it that easy for my children to get rid of me.”