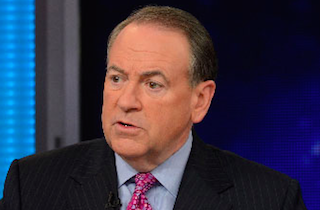 In the days since Friday’s momentous Supreme Court ruling, Mike Huckabee has staked out his position as the Republican presidential candidate least likely to ever accept the reality of marriage equality as a fundamental right in America. And in a radio interview on Tuesday, Huckabee ratcheted up his outrage once more.

Taking on those who would “equate same-sex marriage to a civil right,” Huckabee said, “First of all, what an insult to African-Americans, who were hosed in the street, who were beaten, who were truly discriminated against with separate restrooms, separate drinking fountains, separate entrances.”

“That was true discrimination and it was horrible,” the candidate continued. “It’s hard to say that the redefinition of marriage is on the same basis as was racial discrimination throughout our history.”

Huckabee’s statements recall an argument put forward by fellow Republican candidate Ben Carson last month during an interview with Fox News’ Bret Baier. In an attempt to justify his controversial comments about men coming out of prison gay, Carson said he was “a little bit irritated” that CNN’s Chris Cuomo was “equating” gay rights with civil rights. “Because quite frankly, I didn’t remember any times when there were signs up that says, you know, ‘everybody else here and gay people have to drink at this fountain,'” he said on Fox.

Both candidates have now invoked the separate water fountains that African-Americans were forced to use as evidence that their fight for “civil rights” was somehow more worthy of respect than the one LGBT Americans have been fighting for decades. But just because one group supposedly had it easier than another, that doesn’t mean they don’t deserve the same rights — especially after the Supreme Court rules in their favor.

Listen to audio below, via WJB: