If You Really Think Four Republican Senators Are in the KKK, You’re a Fool 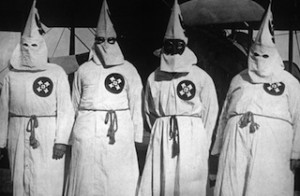 The biggest story of the day on progressive and alternative websites is a shocking one: Anonymous has released the names of four Republican Senators and five Republican mayors who are members of the Ku Klux Klan. Sites giving exposure to this news include Daily Kos, PoliticsUSA, USA Today (?!), The Root, and The Huffington Post. The more careful outlets merely passed along the accusation without naming names, the less savory ones seemed honestly sold on the notion that four Republican senators are members of the KKK.

And if you believe that, I’ve got a bridge to sell you.

To begin with, the Anonymous Twitter account that announced the eminent (and undeniably legitimate) release of information has come out and said the second hacker wasn’t connected with them, and even called the accused “innocent.” (Note: I will not be naming the accused politicians. Their names have been dragged through the mud enough today.)

This account has NOT YET released any information. We believe in due diligence and will NOT recklessly involve innocent individuals #OpKKK

Even if we assume that the other Anonymous hacker isn’t just straight up lying (big if), his own account indicates he has no concrete evidence any of the men are Klansmen:

All I can really say without fully admitting to federal charges is that several databases were dumped from different KKK websites that all linked their emails to the politicians in question and the only way their emails would have been on there to begin with is if they showed support when signing up for [the site] or filled out an application.

Really? That’s all it takes to go on the Internet and accuse someone of being a Klansman? Well, in that case, Barack Obama must be a very prolific cheater, since his name and whitehouse.gov email appear no less than seven times in the newest Ashley Madison hack.

It’s almost as though literally anybody can take someone’s public email address and sign them up for something online. And if I was a zealous Klansman, who would I sign up for email blasts? Why, my Senator, of course.

So yeah, there’s been literally no evidence presented to suggest that any of the men are actually Klanmen. But just thinking about what was being suggested for more than two seconds should have been enough to kill these rumors immediately.

To begin with, the Ku Klux Klan is pathetically small compared to the overall white male population of the South and Midwest. Membership estimates range from 3,000 to 5,000. The likelihood that four separate members of the Klan could find their way into the ranks of the Senate are astronomically low, even if you assume that your average Klansman is coherent enough to manage it (spoilers: they aren’t).

Or to put another way, you’d have to believe that a Klansman is roughly 10,000 times more likely to become a senator than the average American. Or, put even another way, there are supposedly twice as many Klansmen as Princeton grads in the Senate. Now that’s an alumni network.

But even a cursory look at the lives and voting records of the accused should have clued people in. One, for example, voted for Martin Luther King Jr. Day to become a national holiday, a proposal that a sizeable minority actually opposed back in 1983. Why would a Klansman go out of his way to vote for a holiday that promotes racial harmony, instead of joining the 90 Congressmen who voted against it?

Another of the accused senators is Catholic. While the Klan’s anti-black activities are much more rampant and widespread, they are also virulently anti-Catholic.

Oh, and did I mention one of the accused mayors is openly gay? I don’t think that’s the kind of “flaming crosses” the Klan has in mind.

This is exactly the sort of situation to pull out Occam’s Razor. Which of these two possibilities really seems more likely:

My sense is that the majority of my friends on the left have rejected these accusations for the nonsense it is. For those who didn’t, perhaps some serious soul-searching is called for. Whether it’s gullibility or straight up malevolence, it saddens me that people were so willing to believe that their opponents aren’t just misguided or believe differently; they are literally racist terrorists.