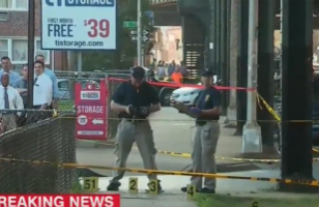 Tragedy struck the Al-Furqan Jame Masjid Mosque on Saturday when a lone gunman murdered an imam and his assistant in Queens, NY.

Imam Alala Uddin Akongi and his assistant, Thara Uddin, were walking together in Ozone Park after completing the day’s afternoon prayer session. New York Daily News said that both men were still in their Muslim prayer clothes, and that at approximately 1:50 p.m. ET, a man described as “tall and dark-skinned, carrying a large handgun, and wearing a dark blue shirt and short pants” walked up and shot them both in the head.

Both Akongi and Uddin died as a result of the attack. Dozens of Muslim men arrived at the scene soon afterwards, with local opinion reportedly being that the attack was a hate crime.

“That’s not what America is about,” said local resident Khairul Islam. “We blame Donald Trump for this…Trump and his drama has created Islamophobia.”

Critics of Trump frequently attack the mogul on the grounds that his incendiary rhetoric and political proposals are antagonizing the Muslim community. Some of Trump’s most prominent controversies pertaining to Muslims include his proposal to temporarily ban Islamic immigrants from America, as well as his attacks on a gold star family who spoke against him.

NY Daily News reports that Akongi was an immigrant from Bangladesh, that he was well respected among the community, and that he was planning on a trip back to his native country to attend his son’s wedding.

“We are devastated,” said Kobir Chowdhury, president of another mosque nearby. “We need to get to the bottom of this. We need to know if they did this just because of our religion.”

Watch above, via CNN and NY Daily News respectively.

UPDATE 8:40 p.m. ET: Newsday journalist Matthew Chayes has posted pictures and video from the community as they grieve for the slain.

Neighbor watches from his window as Queens Bengalis rally for slain imam. pic.twitter.com/LSAlrg3hC1

"WE WANT JUSTICE" signs blocks from scene of imam slaying in Queens. pic.twitter.com/OmwfiwsEbu

"We say, 'hate crime!'": ralliers near slaying of imam/friend. NYPD: no proof men were targeted for being Muslim pic.twitter.com/in6ZhpHY0S

Police are continuing to investigate the double homicide, though they have not yet classified the incident as a hate crime.

“To blame any political candidate for these murders is a highly irresponsible and obviously politically motivated attempt to push an agenda. Mr. Trump opposes crime and violence in any form and, as president, will work with law enforcement and community leaders to create an environment where tragedies like this never happen again.”