Is It Possible for Israel to Be Sued over the Ten Plagues?

Is It Possible for Israel to Be Sued over the Ten Plagues? 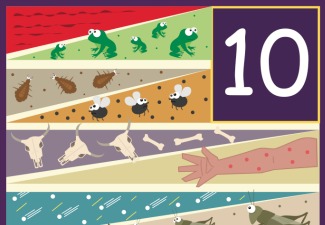 Let me save you the trouble: the answer to that headline is a firm no. Yet somehow, it what is not an April Fools’ Day prank, an Egyptian columnist reportedly called for a lawsuit to be fired against Israel seeking compensation for, yes, the Biblical ten plagues inflicted on the Egyptians thousands and thousands of years ago.

The Middle East Media Research Institute reported on a column by Ahmad Al-Gamal a few weeks ago in which he calls for suits to be filed “to receive compensation for what the Israelis, Turks, French and English took from us.” And the translation they provided shows that Al-Gamal is willing to go as far back as Biblical times to collect this compensation.

“We want compensation for the [Ten] Plagues that were inflicted upon [us] as a result of the curses that the Jews’ ancient forefathers [cast] upon our ancient forefathers, who did not deserve to pay for the mistake that Egypt’s ruler at the time, Pharaoh as the Torah calls him, committed. For what is written in the Torah proves that it was Pharaoh who oppressed the Children of Israel, rather than the Egyptian people. [But] they inflicted upon us the plague of locusts that didn’t leave anything behind them; the plague that transformed the Nile’s waters into blood, so nobody could drink of them for a long time; the plague of darkness that kept the world dark day and night; the plague of frogs; and the plague of the killing of the firstborn, namely every first offspring born to woman or beast, and so on.

Well, look, at least he calling to sue actual countries, and not, say, actually suing God himself. I mean, that would be ridiculous.

[h/t The Blaze]
[photo via screengrab]