Is This Masterful Trolling or Is Nikki Haley Blissfully Unaware of Clinton’s Fight Song?

Is This Masterful Trolling or Is Nikki Haley Blissfully Unaware of Clinton’s Fight Song? 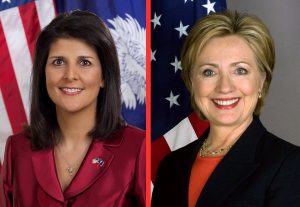 By now, it is very much common knowledge that there is one song synonymous with the Hillary Clinton campaign. It plays at the beginning of every rally, end of every rally, and hell they probably interrupt every rally halfway through just to get up and stretch while this song plays in the background. At the Democratic National Convention in Philadelphia, celebrities like Elizabeth Banks, Mandy Moore, and Jane Fonda all contributed their talents to an a cappella version of the tune that you probably hate:

Rachel Platten‘s “Fight Song.” (I know I know, I also thought it was Katy Perry.)

Staffers working on the Clinton campaign have had to defend the use of the song. Sarah Audelo, the campaign’s millennial vote director, said, “For me, ‘Fight Song’ is a reminder of what’s at stake in this election. The fight for immigration reform, the protection of black lives, environmental justice and the continued fight for reproductive justice. We can’t afford to give up — the stakes are too high.”

Others are not so enthused. Los Angeles Times music writer Gerrick Kennedy said bluntly, “I hate ‘Fight Song.’ It’s one of the worst songs ever released. It’s schmaltzy, forgettable.”

False, Gerrick Kennedy. I will never, EVER, forget this damn song.

And apparently I’m not the only one. This morning, South Carolina Governor and Republican favorite Nikki Haley took to Twitter with the following zesty update to start her day:

Started my day with “Fight Song” by Rachel Platten. Wanted to share so that everyone gets an additional boost! https://t.co/jQbyVtxm1J

“Wanted to share so that everyone gets an additional boost!” she wrote.

Now, the question remains: is this a goofy slip-up by a GOP state governor, whose attempt at a rousing and inspirational social media update is actually a tacit endorsement for a Clinton campaign message?

Or, is this masterful trolling at its best? Without making direct reference to the Clinton camp or its nauseating use of the song, is Haley trying to redefine how its used?

We reached out to the office of Governor Nikki Haley for comment and will update if we hear back.