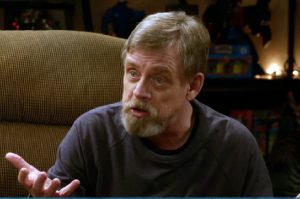 It looks like Luke Skywalker is not a fan of President-elect Donald Trump or the people he’s chosen so far to help lead the country.

In an interview with The Daily Beast, Star Wars icon Mark Hamill commented on the election that resulted in Trump surprising Democratic presidential nominee Hillary Clinton. Talking about a new show of his, Hamill said he was in a state of shock about the results.

“I’m in total denial,” says Mark Hamill, Star Wars’ iconic Luke Skywalker, in a phone interview promoting his new hosting gig on Pop Culture Quest, a geekery-fueled Comic Con HQ showcase for fans, famous figures, and their massive memorabilia collections. “I’m glad I have [the show] to take my mind off what’s going on. Because if you look at what’s being assembled for our government it’s like, yikes. It’s a who’s-who of really despicable people.”

So far, Trump has chosen Breitbart’s Steve Bannon as his chief strategist, Reince Priebus as Chief of Staff, billionaire activist Betsy DeVos as Secretary of Education, Sen. Jeff Sessions as Attorney General and retired Gen. Michael Flynn as his National Security Adviser, among others.

The 65-year-old actor and Democrat said it was tempting to say “I’m moving to Canada” but stated that it was better to stay and fight for your causes.

“But in other ways, it’s a challenge to stay and defend your country and do what you think is right and not retreat and hide under the covers. It’s not gonna be easy, that’s for sure.”

Hamill also talked about how there were rumors that in the newest Star Wars films Skywalker might be revealed to be gay. He noted that the character’s sexuality isn’t addressed in the films, but turned the conversation into a wider discussion about tolerance and how it worries him that certain views may not actually be in the majority like he thought.