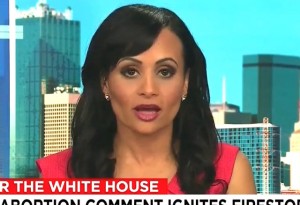 When Donald Trump descended that escalator and thrust “Mexican rapist” into the American political lexicon, another star was born. Trump campaign spokeswoman Katrina Pierson has become nearly as ubiquitous a presence on cable news as the “Breaking News Alert!” banner, and twice as obnoxious.

On Thursday, Pierson took her act to CNN once again to flack for Trump’s gyrations on whether women should be punished for having abortions, and fed her patented brand of polished Trump turds, beautifully plated like a Top Chef master, to a hungry Wolf Blitzer. Pierson continually insisted that Trump’s remarks were about a “hypothetical ban,” even though Trump clearly told Chris Matthews that he supported banning abortion himself. Blitzer also permitted Pierson to repeatedly call Trump’s reversal a “clarification,” and when she brought up the Planned Parenthood scammers’ discredited fantasy, Blitzer offered some almost funny pushback:

Pierson: This is Planned Parenthood, the organization that has been chopping up baby body parts so they can go out and buy new Lamborghinis… Wolf, we do support the idea of life saving procedures like cervical cancer screenings, but this organization to this day still continues to perform abortions, so they have no position to weigh in on particularly the life of the child. A lot more people in this country are pro-life too, as science and technology advances, particularly with late term abortions. Hillary Clinton is the extremist when it comes to abortion, Wolf.

Blitzer: Where is the evidence that they’re purchasing Lamborghinis?

Pierson: She wanted a new Lamborghini, so they were talking about harvesting baby parts for research.

Yeah, Wolf, it’s the Lamborghinis that are bullshit, not the body parts smear. At least Pierson appears to have stopped trying to sell the notion that Trump thought he was talking about punishing lady doctors.

What’s amazing is that Blitzer let her go on like that for a full 12 minutes, and that’s pretty much how it goes every day, several times a day. Now, campaign spokespeople are a fact of life in political journalism, which is its own separate issue. I’d be the first to say you’d be better off interviewing your own network-branded mug of water than the average campaign flack. It’s an only slightly more useful exercise than auto-erotic asphyxia.

But Pierson is a different story, because instead of just chewing and regurgitating campaign patter, she puts on a Benihana display of outright lies and onion-ring volcanoes of obnoxiousness which are, admittedly, perfectly in keeping with her candidate’s ethos, but a radical departure from a news organization’s duty to serve the public. Yes, all campaign flacks fall short of serving the public, but most of them also don’t actively harm them.