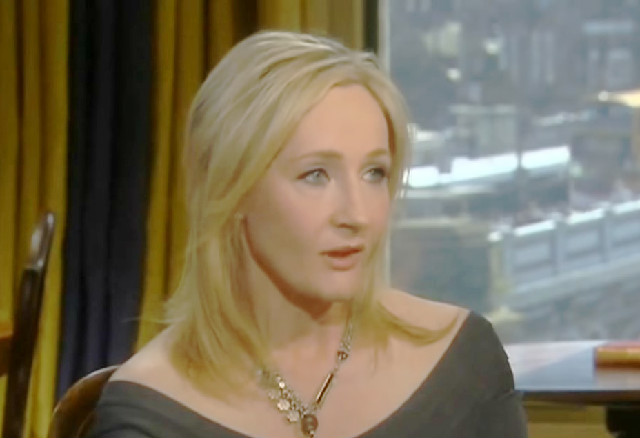 A day after British journalist Piers Morgan’s crazy appearance on Real Time with Bill Maher ended with him being told to “f*ck off” by a middle-finger-waving Jim Jefferies, the former CNN host found himself engaged in a Twitter feud with one of the most famous authors in the world.

Earlier today, Harry Potter author J.K. Rowling tweeted out a video of Jefferies cussing out Morgan, saying it was “as satisfying as I’d always imagined.”

Yes, watching Piers Morgan being told to fuck off on live TV is *exactly* as satisfying as I’d always imagined. https://t.co/4FII8sYmIt

Morgan was quick to respond to the slam, claiming that this is why he’s never read any of Rowling’s Harry Potter books.

This is why I’ve never read a single word of Harry Potter. https://t.co/XUJBMs4KKm

Rowling shot back, wondering if he knew years ago that she would laugh at him and this is why he stayed away from reading her stuff.

Because you had a premonition that one day the author would roar with laughter at seeing you called out for your bullshit on live TV? https://t.co/8rkKSqJTnG

Piers didn’t answer that question, but instead pivoted to what he said during his appearance on Real Time.

Everything I said was factual.
If you think screaming ‘FUCK OFF!!!’ at me changes that, then you’re mistaken. https://t.co/0U9fVoTjfc

Only to be ridiculed by Rowling yet again.

.@piersmorgan Would you like a couple of hours to mock up some pictures of refugees carrying explosives to substantiate your position? https://t.co/sFj0kqIajd

This led Morgan to label the author as arrogant and point to this arrogance as the reason Hillary Clinton and Remain in Britain lost.

The superior, dismissive arrogance of rabid Remain/Clinton supporters like @jk_rowling is, of course, precisely why both campaigns lost.

Well, Rowling replied to Morgan with this:

The fact-free, amoral, bigotry-apologism of celebrity toady Piers Morgan is, of course, why it’s so delicious to see him told to fuck off. https://t.co/4XNF4G0nlD

Morgan also sent out (and deleted) a tweet that read, “Would you like me to explain why all your political views keep being defeated at the ballot box,” which Rowling responded to with the following tweet:

I see: if you win, you’re right? I seem to have read something rather like that before… hmm… pretty sure it was in German… https://t.co/omRwd6l2RW

Afterwards, Rowling retweeted someone who pointed out that despite Morgan claiming he never read a word of Harry Potter, he devoted an article to comparing Lance Armstrong to Voldemort, the villain of the series.

Man who claims to have never read a word of Harry Potter quotes liberally from Harry Potter book https://t.co/DhSD0bck9q

She then ended her battle with Piers with some shade-throwing.

.@piersmorgan If only you’d read Harry Potter, you’d know the downside of sucking up to the biggest bully in school is getting burned alive.