Jake Tapper Shuts Down Katrina Pierson: ‘That Has Never Happened in the History of the World’ 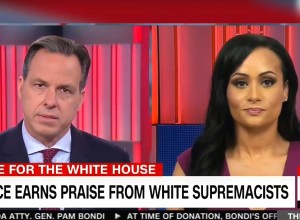 CNN’s Jake Tapper shut down Trump campaign spokesperson Katrina Pierson when she attempted to argue that “Islamophobia” was a word liberals hurled at people who did not want to live next to ISIS.

Tapper asked Pierson if the Trump campaign was at all concerned by the glut of support continuing to pour in from former KKK leader David Duke, a white supremacist radio host, and the neo-Nazi website The Daily Stormer. “Does it make you at all uncomfortable to hear praise from people like that?” Tapper asked.

“No, because you can’t control what other people do,” Pierson said, echoing a familiar line from the Trump campaign that they cannot control who supports them. While the Trump campaign could not be held accountable for their supporters, the same could not be said about the Clinton campaign, she argued. “What makes me uncomfortable is when the father of a terrorist openly supports a presidential candidate,” she said, referring to the fact that the father of the person responsible for the Orlando massacre attended a Clinton rally. Later in the interview, she said that Clinton’s supporters wanted cops to be murdered in the street.

“Katrina… no one has called people who don’t want ISIS to move into their neighborhood Islamophobic. That has never happened in the history of the world.”

“People call people who hate Muslims Islamophobic,” Tapper explained. “But people do not say that about people who don’t want ISIS to move in.”