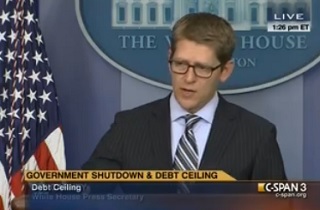 At Wednesday’s White House Daily Briefing, Press Secretary Jay Carney fielded repeated questions about when President Obama learned of the then-unsolved issue of military death benefits being denied during the government shutdown. Since then, the Pentagon has solved the problem, and at Thursday’s White House briefing, Carney read out a timeline of the President’s actions to Fox News’ Ed Henry, while also confirming that just-passed legislation on the issue is “unnecessary.”

At Wednesday’s White House Daily Briefing, Press Secretary Jay Carney promised a “solution” to the death benefits being delayed by the government shutdown by the end of the day, but was unable to pinpoint when President Obama first became aware of the issue. On Wednesday afternoon, Secretary of Defense Chuck Hagel announced that the Pentagon had reached a deal with a private charity, the Fisher House Foundation, to pay the death benefits for the duration of the shutdown, which the Pentagon will repay once the government reopens.

At Thursday afternoon’s briefing, Fox News’ Ed Henry asked if the President will sign legislation, which has now passed both houses of Congress, to pay military death benefits during the government shutdown. Carney explained that the legislation is “unnecessary,” but couldn’t say whether the President would veto the law, or simply exercise a pocket veto by taking no action on it, because Carney hadn’t had sufficient time to be briefed on the bill’s passage in the House.

“To follow up then,” Henry said, “Yesterday, you took the question about when the President learned about death benefits not being paid. When did that filter to the President?”

Carney explained that “In his evening walk with Dennis McDonough on Tuesday, the president raised the concern about death benefits not being paid, that the Department of Defense was trying to find a solution, and that the Pay Our Military Act did not appear to fix it,” and later added that the President “gave them 24 hours, and they solved it in less than that.”