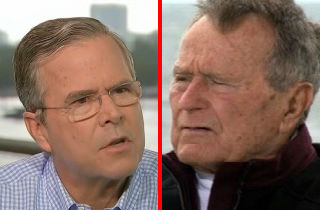 Whether or not Republican presidential candidate Jeb Bush will actually be able to “fix it” remains to be seen, especially since the former Florida governor just told a bunch of school children how much of a terrible father George H.W. Bush was.

On Wednesday morning, the younger Bush addressed students, faculty, staff and reporters at the Founders Academy, a public charter school for children grades 6 through 12 in Manchester, New Hampshire. The topic? Education reform. Or as MSNBC reporter Benjy Sarlin put it, it would “be [an] interesting audience.”

It started out simply enough, but things took a turn when the floor was opened to the kids themselves. That’s when the real fun began, like when one student asked (on behalf of a parent, of course) about border security.

If that weren’t enough to encourage Bush’s campaign staffers to switch gears, another kid asked him what it was like to have a former president as his father.

Jeb, asked what it was like growing up with a presidential father: “When I was a kid, he was just a dad. And he was the greatest dad alive”

His initial answer was typically positive, but then things took a rather dark turn.

Jeb on George HW: “All he would have to say is ‘I’m disappointed in you’ and it would send me into a deep spiraling depression for days”

Whether you prefer “deep depression” or “deep spiraling depression,” only one important point remains — he’s talking to school children. (Middle schoolers, to be more precise.) And what’s Bush talking to them about? How is presidential father’s parenting would sometime make him very depressed.

Let’s hope Jeb Can Fix It.