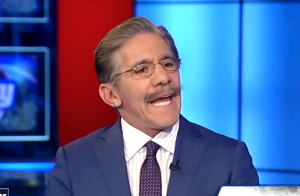 Rivera said Obama is only interested in race “when the African-American person is portrayed as the victim, whether it’s Trayvon Martin or Michael Brown or any of the others,” suggesting the president “jumps in with the classic NAACP, ‘We are victims, woe is us, take care of this situation.'”

“Yes, there is a terrible problem with police brutality,” Rivera continued. “But it pales in comparison to the ghetto civil war that’s going on, this black-on-black violence is not to be ignored, it’s not to be minimized.” Rivera said he has “never seen the president get engaged when it’s an African-American killing another African-American or two gangs killing and an 8-year-old is killed in the crossfire.”

Clarke responded that police brutality is “not a pervasive problem in America, Geraldo, you know better that,” adding that  Obama is “delusional” for thinking he has improved race relations in America.

“Race relations have always been tenuous in America,” Clarke began. “Slavery and discrimination left an ugly scar on the soul of America, but that scar has been healing for years. President Obama came along with sandpaper, rubbed it raw and then poured salt on it to inflame it for political gain,” he said.

“Deal with it,” Clarke retorted.