Jennifer Lawrence Will Never Join Twitter: ‘The Internet Has Scorned Me’
VIDEO

Jennifer Lawrence Will Never Join Twitter: ‘The Internet Has Scorned Me’ 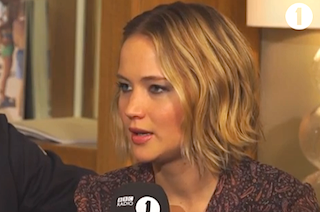 If you ever see a Twitter or Facebook account with Jennifer Lawrence’s name on it, you can be sure that it’s not really her. During an interview with her Hunger Games co-stars on BBC Radio 1 this week, the actress vowed that she would never join Twitter because the internet has “scorned” her too much.

“I will never get Twitter,” Lawrence said in response to a fan question. “I’m not very good on phones or technology. I cannot really keep up on email so the idea of Twitter is so unthinkable to me.”

“I don’t really understand what it is,” she continued. “It’s like this weird enigma that people talk about. It’s fine, I respect that, but no, I’ll never get a Twitter. If you ever see a Facebook, Instagram or Twitter that says it’s me, it most certainly is not.”

“I had that one locked and loaded,” Lawrence added. “It’s because the internet has scorned me so much that I feel like it’s that girl in high school that I’m like, ‘Oh you want to talk about her? Yeah I’ll do that!’ Take my hoops off, I’m ready to go.”

Of course, one way in which the internet has “scorned” Jennifer Lawrence were those nude photos of her that leaked online this past fall. “Anybody who looked at those pictures, you’re perpetuating a sexual offense,” she told Vanity Fair last month, adding that she doesn’t “have anything to say I’m sorry for.”

Watch the full interview video below, via BBC Radio 1 (Twitter bit starts at 8:52):