John Kasich Would Love to ‘Abolish All Teachers’ Lounges’ 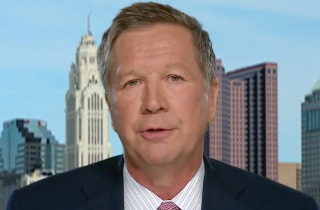 2016 GOP presidential candidate and current Ohio Gov. John Kasich told a New Hampshire crowd on Wednesday what he’d do about those lazy, scheming, no-good teachers if he became King of America.

According to CNN, Kasich broached the rather intriguing-yet-unnecessary topic of being the next King of America at the 2015 New Hampshire Education Summit, hosted by The Seventy-Four, where several Republican contenders railed against the scourge of overpaid teachers. Unlike the rest, however, the Ohio governor channeled his inner royal.

“If I were not president, but if I were King of America,” he told the crowd, “I would abolish all teacher’s lounges, where they sit together and worry about ‘woe is us.'”

Of course, like any good potential member of the American royal family, Kasich made sure to clarify his comments via one of his campaign’s many plebeians, spokesperson Rob Nichols.

“He thinks teachers have far more support in their communities than they sometimes give themselves credit for and they shouldn’t pay attention to the small number of pot-stirrers in their ranks who try to leverage problems for political gain,” Nichols said in an official statement. “Anyone thinking he was making a comment on buildings or school architecture or space usage might need to look up the word ‘metaphor’ in a dictionary.”

Whenever the nation’s public schools are able to afford said dictionaries for educational use, I’m sure they’ll teach the definition of “metaphor” to the next generation. That way, such a grossly unintelligent mistake won’t happen again come the next celebration of King John’s reign.