Journalism In 2009: The Year Of The Big Easy

Journalism In 2009: The Year Of The Big Easy 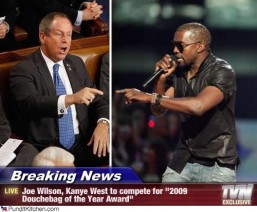 It may or may not come to pass that 2009 was the year “real” journalism died (at least as we’ve come to understand the definition). Despite the plethora of hard news stories in 2009: the inauguration of our first black President, the economic collapse, health care reform, the Iran election, Iraq, Afghanistan, etc. (forget about a big decade, it’s been a big year) it does feel like all the big news stories we actually recall in our year-end lists have been a bit…hollow (or bogus, depending). Says Salon’s Joan Walsh:

Yet the media spent a lot of time chasing non-stories, from Balloon Boy to Sarah Palin’s death panels…Why did so many news organizations, from old media and new, chase silly, shiny distractions? Mainly because it’s easier than reporting out, and attracting readers to, big questions of politics and public policy.

That is true, in a year of hard news the media has gone soft, likely to our detriment. That said, should this really come as a surprise? Obviously, “shiny distractions” are easier. You know why? Reporting is not only hard, it is costly and time consuming. Costly and time consuming, meanwhile happen to be at odds with just about everything to do with the media these days. Or, to be more precise, new media looking to survive, which at this point pretty much covers all media. We are, sadly, talking about an industry in which the only newspaper to finish the decade looking somewhat similar to how it started it is the New York Times, and anyone who has picked up the Sunday Times of late will tell you even that it is a ghost of its former 3.5 lbs self.

It’s easy (also, consistent content filler) to bemoan both the loss of good reporting and ease with which the blogosphere (and increasingly the MSM) picks up hollow, splashy, polarizing stories. However, this doesn’t change the fact that until someone creates a new, workable business model the coin of the Internet realm is traffic. And traffic is most cheaply generated by frequency and shock value, two things which are very much at odds with in depth reporting.

None of this is news. So why it should therefore come as a shock that a year which saw the financial bottom plummet out of the MSM also saw the rise of the sort of easy, splashy, stories that the Internet most easily allows for, seems naive. Traffic talks in the new media Internet world, what it does not do yet is report and/or research whilst penning the required 15 posts per day.